Dear Legends! It's time for holidays and we wanted to offer more activities than ever before with the Last Battleship campaign, the Yamato madness and various new opportunities in the Admiralty. We hope you have fun! Please be informed that this update will last for 6 weeks, until February the 3rd.

Let us take this moment to wish all of you the absolute best in the New Year! Don't forget to spend some quality time with your families, friends and loved ones!

We appreciate that you've chosen Legends as one of your pastimes and hope you enjoy the little gift we've put in the store (grab it until January 6!). Triple first win bonus is also going to be available from December 25th to January the 3nd.

More of everything is about to come in the year 2020 and we hope you'll stay with us on this journey. See you in 2020 and turn the tide!

The festive New York port becomes your home destination in Legends! Complete with the famous skyline and the Brooklyn bridge! Fireworks included. The port will remain your backdrop for the full duration of this update. 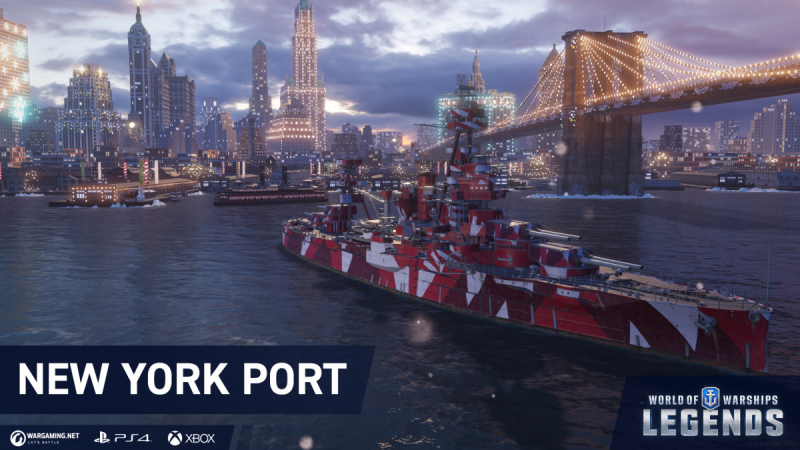 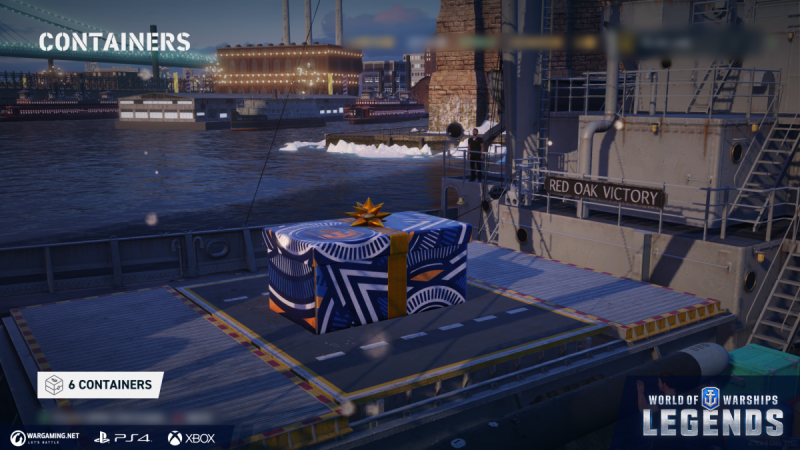 A new currency for the Admiralty Store. Choice of goods includes Premium ships G-101 and Asashio in addition to all the consumables.

The Yamato is finally making an appearance! Note that she arrives for a limited time but she'll make a permanent return later. Yamato is the first Legendary tier ship, she is simultaneously the most powerful ship in the game, hence the special matchmaking rules which are described below. 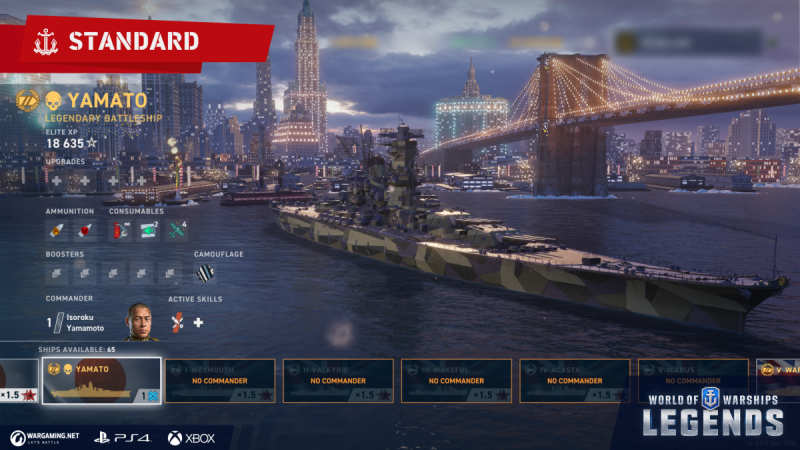 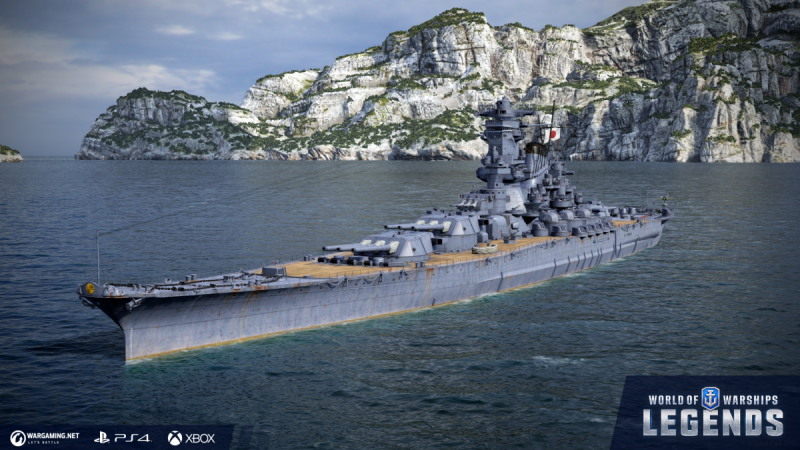 *Asymmetrical battles are only possible in Standard mode

Have at it and bring some extra destruction this holiday season!

This time our campaign encompasses 6 weeks and only contains a set of weekly challenges without the "Battle triumph" component. The price for Admiralty Backing is 2500 doubloons and as before it only works for this specific campaign. Don't forget that you can get it at any time, receiving all the already reached milestone rewards instantly, so make sure to gauge your progress before getting an Admiralty Backing. Jean Bart, a tier VII French Premium battleship is the ultimate reward for this campaign. Other than frontal position of both the gun turrets, she has a unique consumable - Main battery reload booster, which can make an encounter with a broadsiding enemy especially fatal for them. 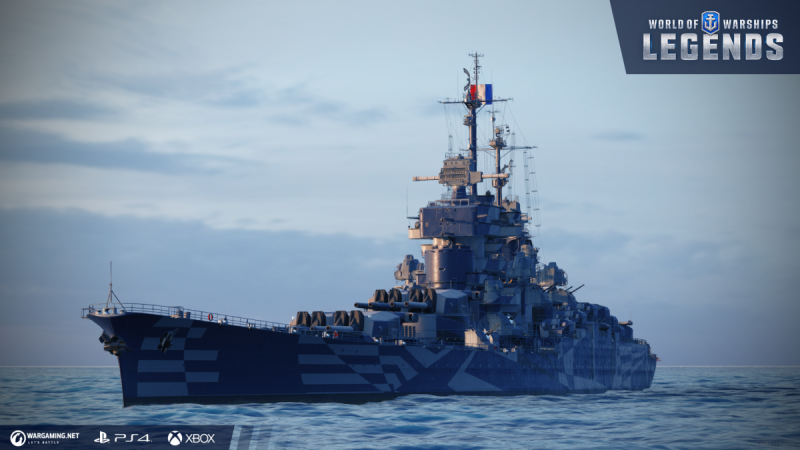 Here's what you can get from the campaign.

The free rewards for the whole campaign:

Total doubloon value of rewards without the Admiralty Backing: 14230.

If you get backed by the Admiralty (2500 doubloons), you can also unlock these rewards if you complete the whole campaign: 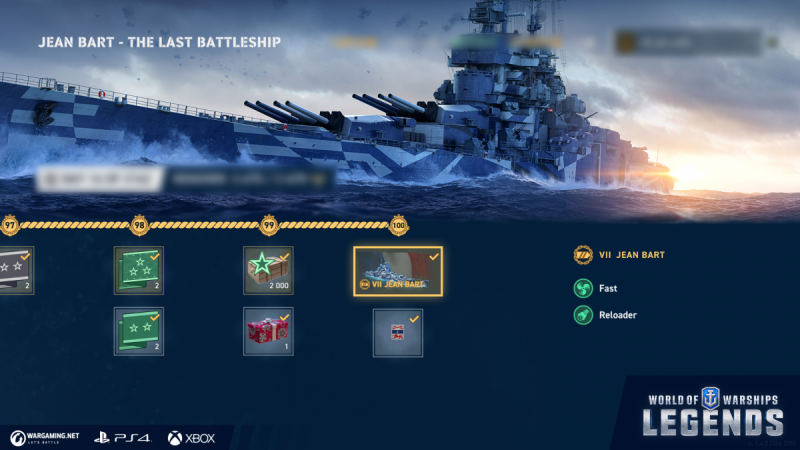 We've made 2 sets of changes to the maps and their spawn points. High tier map spawns have been modified to allow for later spotting, while maps for tiers up to 6 mostly have been looked at in terms of spawn balance, meaning that there were slight discrepancies between the teams depending on where a particular team spawns. Those discrepancies aren't often more than 1% but we decided that a change was warranted anyway.

High tier spawns with delayed spotting have been introduced for the following maps:

Maps that had spawns and caps tweaked to accommodate for better balance:

Some maps will also appear less in the matchmaking, than before.

You'll find some bold balance changes in the update, mostly aimed at increasing the cruiser population at tier VII. Read on for the full details.

The Akatsuki was overall too effective compared to her counterparts. We also wanted to make the Kagero seem to be more of an improvement, however her balance is fine as is. That's why Akatsuki's torpedoes are receiving a little nerf:

Nagato, Amagi and Iowa showed too much combat potential compared to their rivals. Additionally Cruiser were not able to deal enough damage to Amagi and Iowa. Thats why these two ships received a change to the HP compartment distribution adding more HP to the superstructure, stern and bow, so they are a bit easier to damage.

Nagato was going a little bit over the line in her winrate, therefore she receives a slight nerf to her firing capabilities.

While Amagi is not the most popular choice among the tier VII battleships, she sure is the most effective, hence the straight artillery nerf.

Iowa was simply perceived as overpowered for a long time and we want to cull that perception a little bit, and while it is true that she's easier to take advantage of than Amagi, we didn't want to go overboard. Future tweaks are still possible.

All Tier VII cruisers were lacking survivability against Battleships making them a less popular choice, which is something we wanted to change. Therefore they receive Repair Party consumable (except for Charles Martel which shows great results even as is, however, no balance is ever final!). These changes will improve the cruisers' longevity, giving more room for mistakes and their correction. This should make their gameplay a bit more forgiving. This will also affect their ability to counteract destroyers in high tier battles, possibly reducing the number of destroyers per given match. 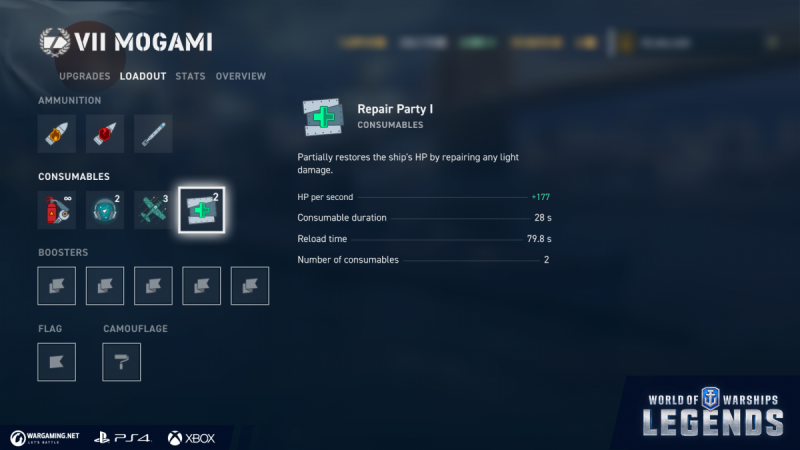