Server maintenance will take place on December 21, after which the Update will be pushed to consoles.

Legends! The year 2020 hasn’t been so easy, so it might well be the right time for everyone to Turn the Tide and reach for the sky in 2021! Here's to a great year ahead! A lot is happening in this Update, so dig in!

One of the highlights of this Update is our new Campaign that’s built around Tier VII USS Massachusetts—a real menace embodied in a form of a battleship, replete with 16-inch main guns, far-reaching and accurate secondary guns, and great protection against both shells and torpedoes. But, while the Campaign is named after this particular steel beast, there's one more ship along the 120 milestones—Japanese Tier IV cruiser Yahagi. 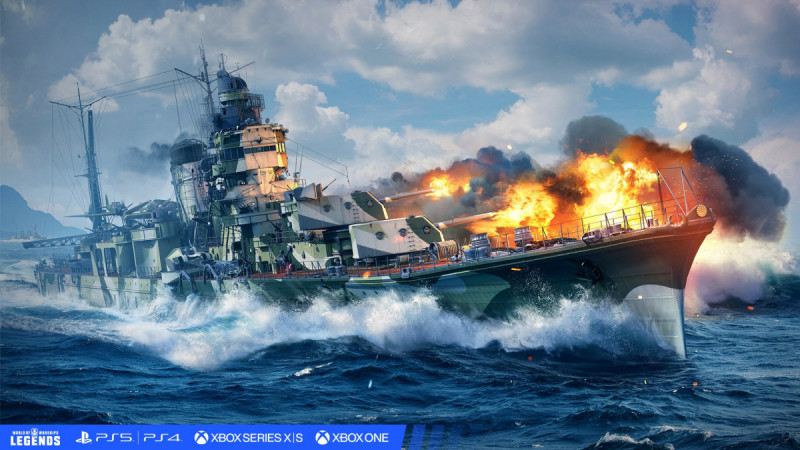 She’s quick and maneuverable, and mostly slings HE shells. Yahagi is also equipped with torpedoes, but they should be used with caution and foresight. She makes easy prey for battleship shells, so use her speed to your advantage. The Admiralty Backing for this Campaign can be obtained for the usual 2,500 doubloons. However, as mentioned before, the total Campaign runs across 120 milestones, so if you decide to buy these ships outright, it will cost you 32,250 doubloons, including the Admiralty Backing.

While the missions themselves aren’t unusual, they are separated into three 2-week parts, so resets will only happen on weeks 3 and 5. 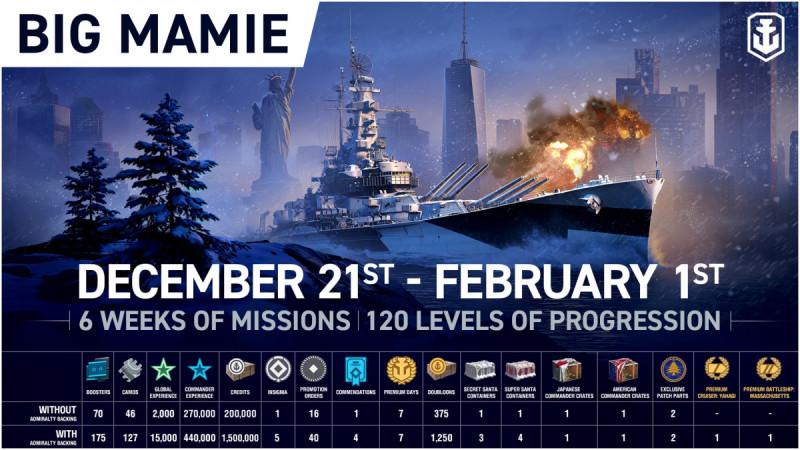 An important thing to note is that after completing the Campaign (reaching the final milestone), either with or without the Admiralty Backing, you'll unlock the Icebreaker Havoc missions. As the name suggests, these will reward you with Icebreaker coins. You can learn more about this currency in the next block.

Rewards you can get without Admiralty Backing for the Massachusetts Campaign:

Value of the rewards without the Admiralty Backing: 19,243 doubloons

Total value of the rewards including the Admiralty Backing: 83,225 doubloons

For this Update we’ve tied many activities and Store items to the new temporary currency—Icebreaker coins. It's going to be useful for a few things: the usual Admiralty goods; Legendary ship rentals (yes, you read it correctly!); and a special ship—Tier VII Soviet battleship Lenin, which possesses a triple gun turret layout not unlike that of Nelson, with her B turret being able to rotate a full 360 degrees. Her 16-inch (406 mm) guns rotate quickly and have enviable firing angles. She also comes with the Soviet Damage Control Party, which reloads rather quickly, but has limited charges. Lenin's citadel is also quite vulnerable when her broadside is exposed, much like that of her Tech Tree brethren.

You can earn Icebreaker coins by:

With that in mind, we want to share an important disclaimer about Lenin: she costs 25,000 coins, which means that it isn't possible to obtain her for free. You will either have to purchase some Super Santa containers, or buy out the Campaign, so the initial population of this beast is expected to be pretty limited. However, this doesn’t mean that Lenin will never appear in the game again, so don't worry too much.

By our estimations, if you don’t purchase anything, and try to complete every activity that rewards you with Icebreaker coins, you’ll be able to earn about 17,000 coins.

We're bringing in another non-Legendary project for you to have some fun with! This time, the theme is based around the Battle of North Cape, and the main attractions are Arctic Skins for Edinburgh, Scharnhorst, and Duke of York (the latter of which is coming to the Premium Shop). To start this Project, you only need to have finished your Intro Project. This particular Project differs from the those that have come before in that it's time-limited and will cease to be available once the Update concludes on February 1, plus the maximum boostable progress of this project is 80% (15,000 doubloons in total), and there are five Stages per Segment. Please note that most Segments also require high-tier ships and higher-ranked Commanders. This Project is by no means easy, but we believe that most regular players will be able to at least outfit their Edinburgh in the Arctic skin. 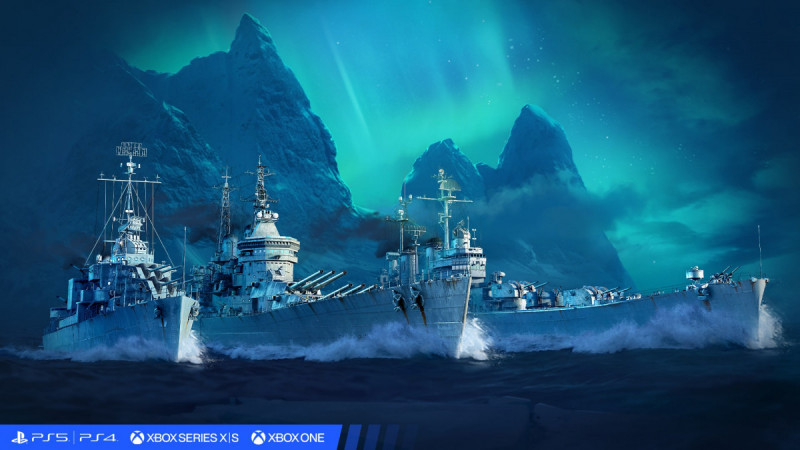 You heard it right! During this Update, you'll be able to take the reins of three Legendary-tier ships that aren't even available in the Bureau yet! For 1,500 Icebreaker coins, you'll get to sling HE shells from one of the larger light cruisers—USS Worcester; enjoy the well-rounded gunboat—USS Gearing; or succumb to battleship pyromania with HMS Conqueror. The only special rules for these rentals is that they will be removed from your accounts on February 1, you cannot create permanent camouflages for them, and any XP you earn playing them will be transferred to their respective nations' Tier I cruisers once the Update is over. The base service cost for these ships is the same as for other Legendary ships—200,000 credits. One last fact of great importance is that you'll be able to use these ships to earn back the Icebreaker coins you spend on them, and even make some extra.

The holiday container madness is about to happen once again! We've boosted the containers in comparison with last year, and there are some special ships that will only be available from these containers, namely Japanese destroyer Asashio and the Japanese battleship Kii. The special flair for this year's containers is that they might just drop a superprize! Do keep in mind that there is a fairly miniscule chance of this happening, so we're not assigning it a numeric value on our container page, but if you do receive a year of Premium or 100,000 doubloons, it's not a glitch—you've lucked out on a superprize! The containers can be obtained by participating in various activities, including, but not limited to, the Campaign and Ranked Battles. Make sure to follow our social media to stay on top of the details! And how about one “Secret Santa '20” container, as well as 3x Santa in Blue and 3x Santa in Red Camos to start having fun with right away? Redeem the code O4DC7BJ8FK at wowslegends.com/code-redeemer and get ready for festivities!

This new Ranked Season will be the most different out of them all, as we're pitting 5-player teams against each other, and what's even more hardcore—the 1st player on the losing team won’t keep a Star. We're also deliberately moving the Ranked play to the last 4 weeks of the Update.

Suffering from fires is something that many battleship Captains shared in their feedback with us. In this Update, we’re providing you some tools to minimize the effect of fires on your battleship gameplay, mostly in the form of Commander skills. We're limiting the Equilibrium of Power skill and offering improvements to existing skills, plus adding another completely new one. These are the changes you can expect:

This skillset may minimize your fire woes should you choose to give up some accuracy on your battleships, but the final effect, of course, remains to be seen. 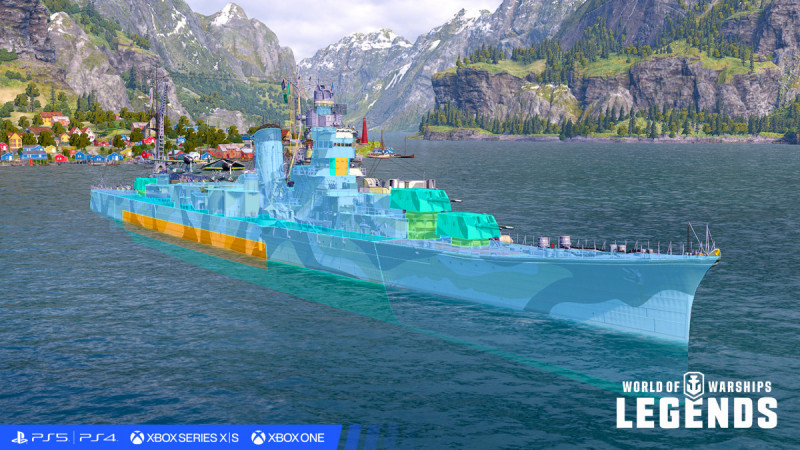 This one is self-explanatory: get into the nitty-gritty of your ships and find out their weak spots to make sure that you never expose them in battle! There are helpful tooltips for different thicknesses and ways to look at pretty much any armor layer there is on any given ship.