Server maintenance is scheduled to take place on March 9 (Tuesday), after which the Update will be pushed to the consoles.

With their Early Access period now over, you can research all the heavy Brits and take advantage of their diverse capabilities. The crown jewel of the line—Albemarle—brings the Radar consumable to the table in addition to her already diverse heavy cruiser kit. 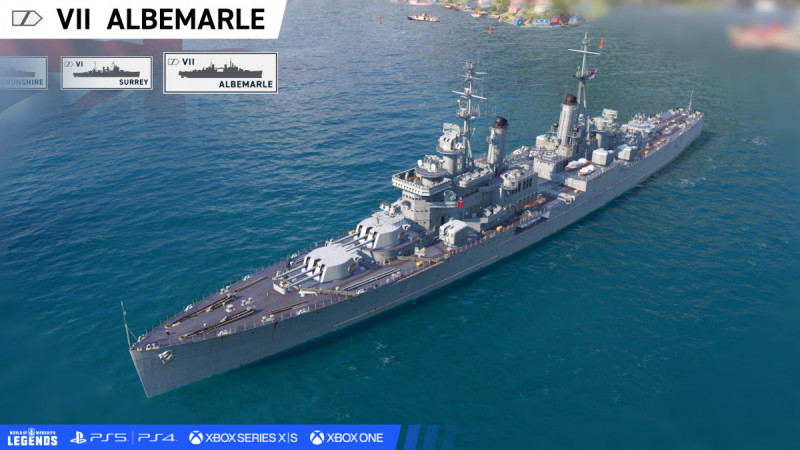 The other ships—Hawkins, Devonshire and Surrey—are now also researchable, so get in and get shooting if you didn’t have a chance to in the previous Update!

Our new Campaign features Ochakov, a Soviet project for a compact light cruiser. We named the ship after Russian cruiser Ochakov, which was built in 1906. The original cruiser received her name in turn from the 1788 siege of the Ochakov fortress, which was led by Prince Potemkin and General Suvorov during the Russo-Turkish war.

Our Ochakov has an interesting combination of features: a far-reaching Radar that you can equip at the same time as Sonar; effective torpedoes that can travel as far as 8 km; great, nearly flat ballistics for her eight 152 mm guns; and a narrow citadel profile that can result in a lot of overpenetrations from battleship AP rounds.

The ship’s concealment and survivability are average, so you’ll have to choose your battles carefully and keep your distance. Thankfully, Ochakov’s top speed is around 35 knots, so kiting is very much an option.

The Campaign comprises five Weekly Havocs with similar tasks. Importantly, once you’re done with the usual task chains that require Tier III–VII ships, you can also use your Legendary ships for the remaining three tasks.

As with the previous Campaign, you can earn Steel Badges in this one once you’re done with it, and you’ll be able to get as many as 250 Badges per week by completing Daily and Weekly Endless Trials. But keep in mind that the first week of the Update is only 6 days, which means just 225 Badges. In total, if you buy out the Campaign on day 1, you'll be able to earn as many as 1,225 Steel Badges.

The available rewards are: currencies, Camos, Boosters, a special patch with a background, Premium time, and doubloons. To obtain Ochakov, you need to purchase an Admiralty Backing for 2,500 doubloons. Individual milestones are, as always, skippable for 250 doubloons each, which means that getting Ochakov day 1 of the Update costs 27,250 doubloons.

The detailed Campaign rewards and their value (with and without Admiralty Backing) are as follows: 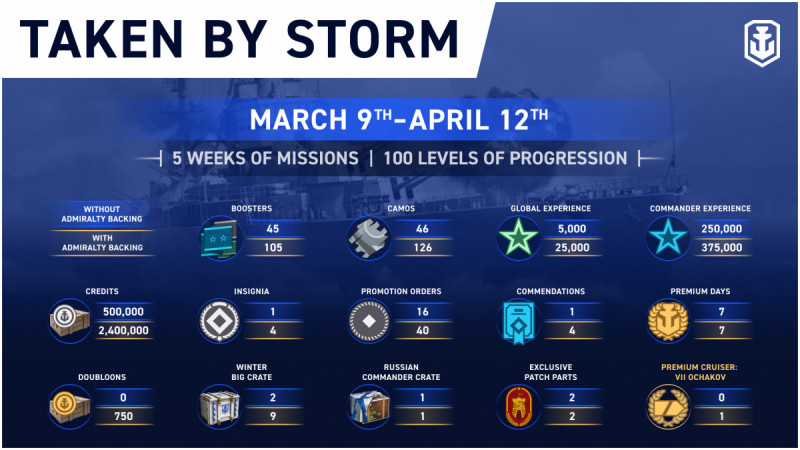 Total value of the rewards without Admiralty Backing: 15,363 doubloons

Additional rewards you can get with Admiralty Backing (2,500 doubloons):

Total value of the rewards including Admiralty Backing: 67,080 doubloons

The previous Season was the most demanding and unforgiving yet, so the coming two are a complete flip of that formula. There will be two 3-day Sprints, occupying two weekends. And get this—there are only seven ranks with every rank being irrevocable, so many more players should be able to make it to Rank 1 this time. Additionally, the matchmaker will not separate players by ranks this time. The caveat is that the losing team still doesn't get any Stars, or keep any. We understand that this will not be the most popular decision, but we feel that—considering the other factors in play—this is a good compromise. The main rewards for both Seasons are Steel Badges and if you reach Rank 1, you can earn up to 700 of them per Season. Other rewards include containers, Promotion Orders, Insignias, XP, Camos, and doubloons. To get the full details, please check the Ranked mode window once each Season starts.

As we often do, we've taken your feedback into consideration and came to the conclusion that the U.S. side lacked a destroyer Commander who could significantly boost concealment and torpedo armament. 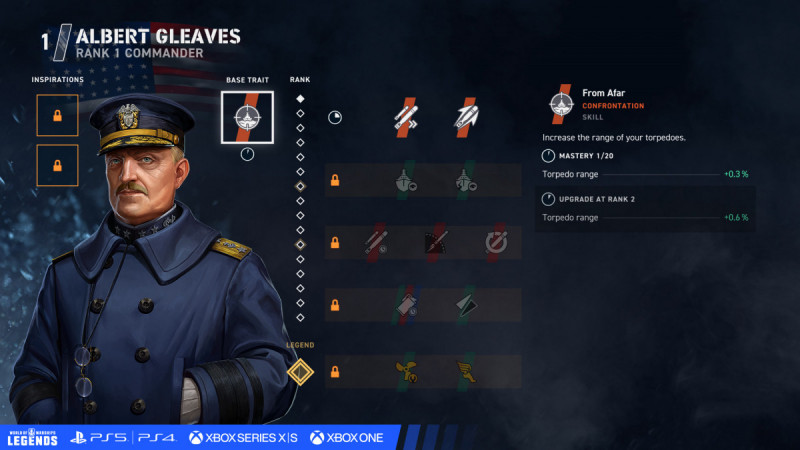 To address this, we're adding Albert Gleaves, whose purpose is to fill that role.

New Projects in the Bureau

These additions might not come as much of a surprise, as many of you tested the ships in January, but nevertheless, USS Gearing and HMS Conqueror can now be researched through the Bureau. The Projects are similar in terms of time and difficulty to previously available Legendary projects. Gearing could be considered one of the top gunboats in the game, maybe even the top gunboat, while Conqueror brings her fire-slinging playstyle to high-tier battleship fights. The Projects are here to stay, so you're free to research them at your own pace! 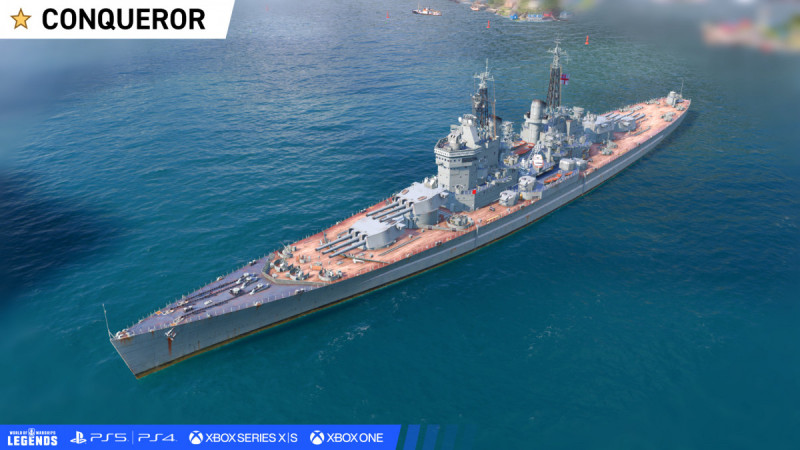 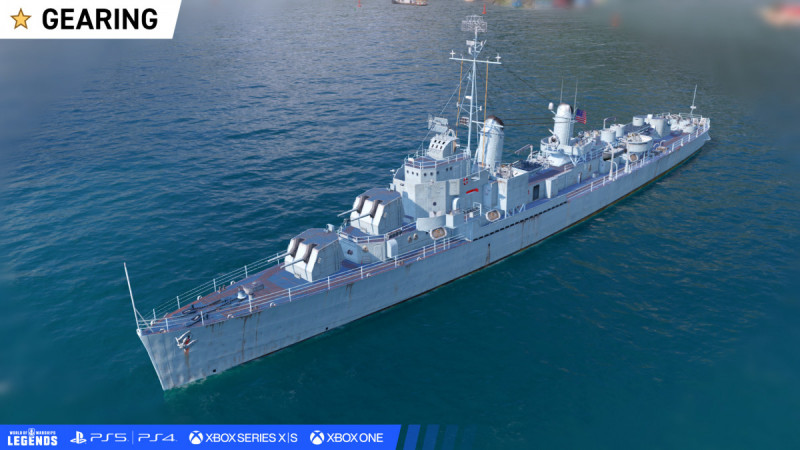 There are additional changes in the Bureau. Namely, we're moving completed Projects to the archive so they don't clutter the main Bureau screen. Additionally, some Projects will now become "deprecated," which means that if you haven't started researching them already, they will no longer be available. Two Projects will receive this status—Legendary Anniversary and “Red, White, and Blue.” With the launch of the April Update, any players who didn't start them will no longer be able to do so. If you haven't started them—now is the time to get on it! Please note that once you start a Project, it will remain available to you until you finish it, unless stated otherwise.

This time, we're looking at two more ships, including Bismarck, and for a little teaser—there are changes coming to German secondaries in the near future.

From March 16 until the end of the Update, we’re going very green! We're adding yet another wave of content to coincide with a holiday, and this time it's St. Patrick's Day! This year, you'll be able to get yourself HMS Belfast, as well as St. Paddy's Camos to greenify any of your ships! 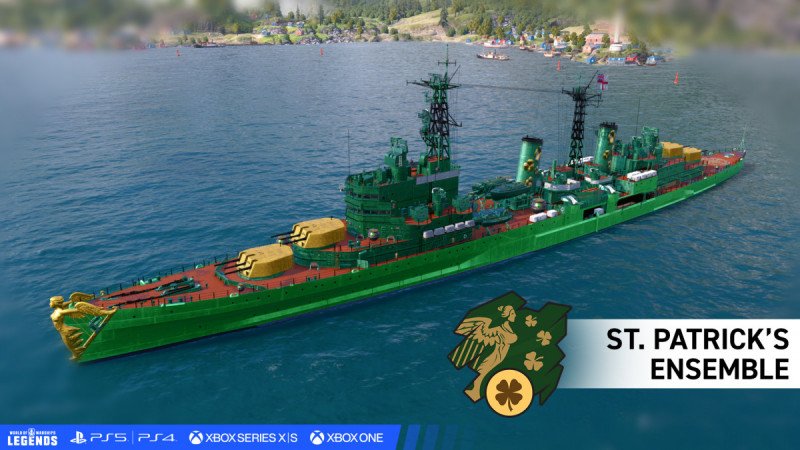 We will also introduce a special container—Pot of Gold—which will only be available in exchange for real money. What's interesting about it is that it's guaranteed to contain 1,250 doubloons in addition to the St. Paddy’s Camo! Additionally, you may receive Commander items, as well as two specials—a green and gold Skin for Belfast, as well as a superprize—100,000 doubloons. Naturally, the superprize has the lowest chances of dropping out of the available rewards, so we advise you not to go hunting for Pots of Gold just to get it, but rather to see it as a nice bonus if you're lucky!

New Premium Ships in the Store

The following ships are going to be appearing in the Store during this Update:

Follow our info channels to find out the details about ships' release dates and stats!