Server maintenance is scheduled to take place on Monday, June 21. Once the maintenance is close to complete, the Update will be pushed to the consoles.

Legends! Our latest Update focuses heavily on American battleships—you can expect to find them in Early Access, a Campaign, and in the Bureau. Some balance changes have also been made due to the addition of German aircraft carriers.

This Update brings three new battleships to reinforce the American fleet with big guns and strong armor. Tier IV to VI ships will be available in Early Access.

Nevada is a slow-but-steady heavy hitter at Tier IV. She’s armed with ten 14-inch (356 mm) guns housed in four turrets. With her bread-and-butter battleship gameplay, you shouldn’t expect any fancy consumables, but sinking ships from behind her helm will certainly constitute honest work.

Tier VI sees North Carolina raise the stakes with nine 16-inch (406 mm) guns that traverse faster than those of the preceding tiers, while her super-heavy shells also hit harder. At the same time, she’s the first in line to truly break the 20-knot speed barrier—while she’s by no means fast, she’s comparatively mobile. The anti-air suite of the line also takes a dramatic turn for the better with North Carolina, even if her overall survivability isn’t much improved. 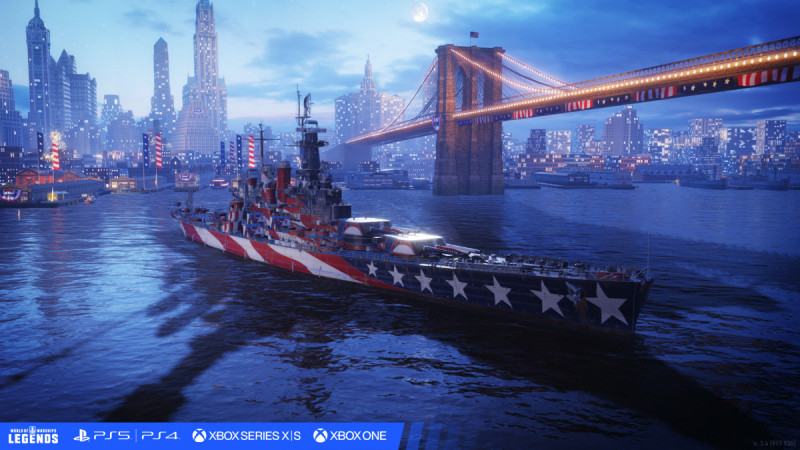 The battleships will be available via the Early Access mechanic in this Update, which means that you’ll need to open USN Battleship Crates if you want a chance to helm these mammoths. The Crates are available in regular and big variants as usual, and they will be offered as rewards for the new Campaign and will also be sold in the Store. USN Battleship Big Crates have higher chances of dropping one of the new ships, but if you’re not into relying on pure luck, simply wait for the next Update to research the new line up to the imposing Kansas at Tier VII! If you manage to pull a ship from a Crate, she’ll come with a personal mission that will reward you with doubloons and Commander items. The missions are only available once per ship.

Georgia On My Mind Campaign

Georgia—an American Tier VII battleship—is the pride of our latest Campaign. She offers relatively accurate and exceptionally hard-hitting 18-inch (457 mm) guns, but in a limited battery of six guns. Despite their limited number, they reload quickly for a battleship, and Georgia's AA capabilities are among the best. Her top speed of 33 knots also allows for significant tactical freedom when choosing where to position yourself for attack or defense. 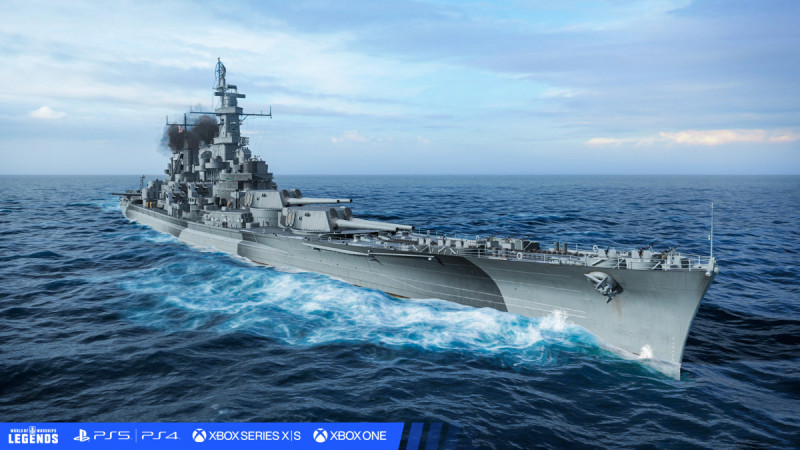 All of that should be taken with a pinch of salt—Georgia’s armor can still be melted away by enough HE shells and her full salvo is not that impressive. However, her Repair Party has a fairly short cooldown and can offset some non-fatal errors.

The Campaign runs for 5 weeks and features 100 milestones that you can either beat or skip. Obtaining Georgia herself requires you to have an active Admiralty Backing, which is available for 2,500 doubloons.

The exact rewards you can get for completing the Campaign with or without the Admiralty Backing are listed below: 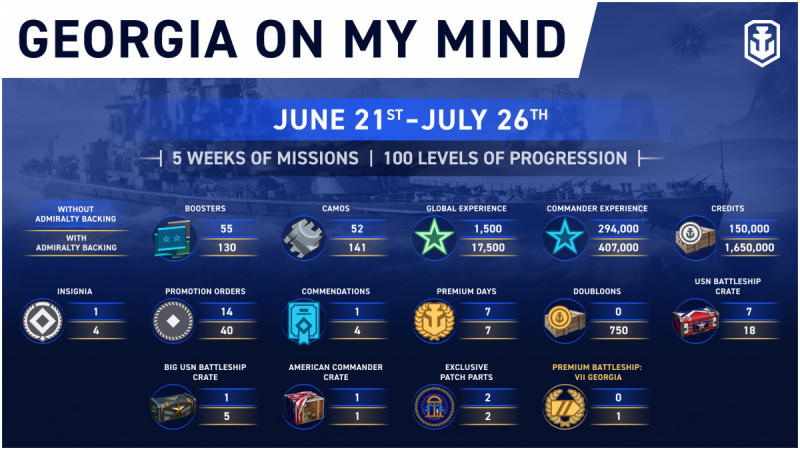 Value of the rewards without the Admiralty Backing: 16,790 doubloons

Additional rewards you can get with Admiralty Backing (2500 doubloons):

Total value of the rewards with the Admiralty Backing: 71,015 doubloons

How many American battleships do we need? There’s always room for one more, surely! Please welcome Oklahoma—a Tier IV Nevada-class battleship with solid armor and a decent punch in her guns to do your deeds in those lower-tier missions. 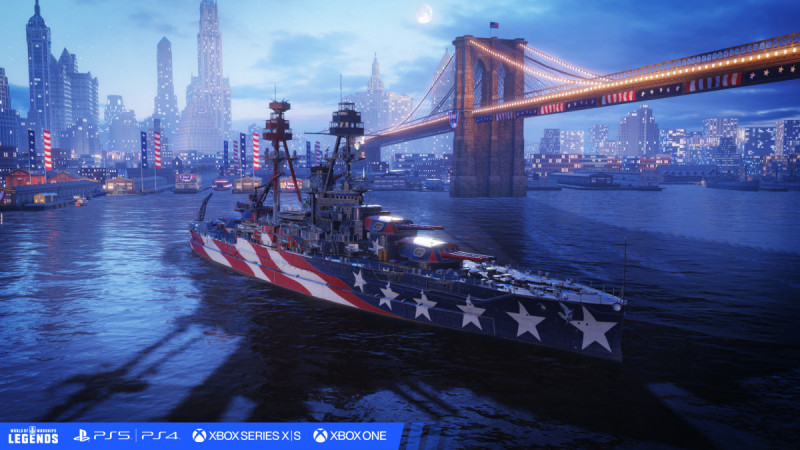 But wait, there's more! En route to unlocking Oklahoma, you're going to get a whole range of Grade 1 Permanent Camos for the following American battleships:

Please note: this Project isn't time-limited, but at some point it will be deprecated. We strongly advise that you at least start it—this will mean that you never lose it.

We have a new line of aircraft carriers entering the waters and preparing to fight for the skies: Rhein, Weser, and August von Parseval!

These three behemoths offer a fresh perspective on carrier gameplay thanks to their access to AP bombs. Acting much in the same way as AP shells, these bombs can reliably hit ship citadels and deliver significant damage, but they cannot start fires. 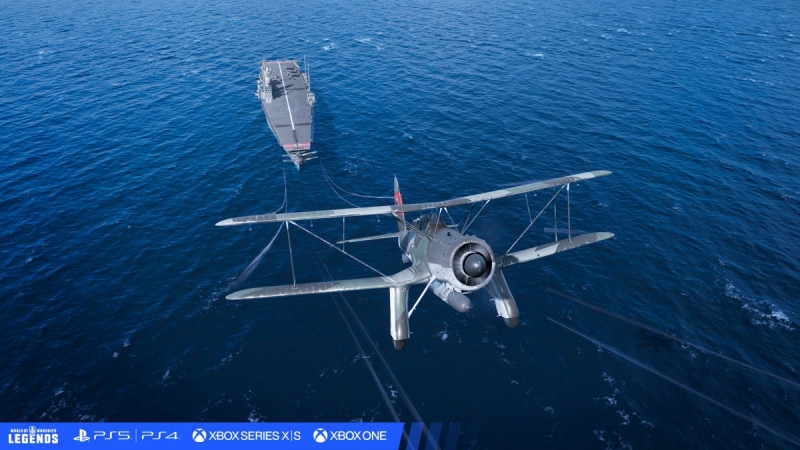 A special Commander is also coming in to helm the new carriers—Hans Geisler. His base trait, Barrage, is a bit unusual for carriers. It speeds up the reloading of secondary guns for any ship type when chosen as an inspiration. As German aircraft carriers have somewhat better secondary guns than other nations, this edge may come in handy in a pinch. The regular and Legendary skills in his arsenal focus on improving AP bombs, while the active component of his "Corkscrew" Legendary skill diminishes incoming damage to the carrier when allies are nearby. Additionally, his "Impervious" skill reduces the damage your German aircraft carriers take from instances of fire and flooding  "Dark Silhouette" skill improves aircraft carrier concealment. Hans Geisler is available from German and International Commander Crates, as well as for 900,000 Commander XP from the Store. Additionally, look out for the “German Carrier Commander” special mission that will be available for the duration of the Update—it will reward you with Hans Geisler. 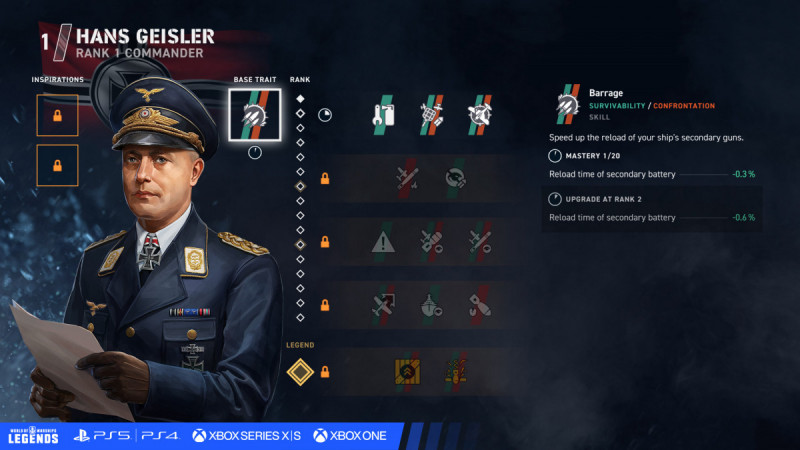 Finally, coinciding with the introduction of the German carriers, the Tier VII plane squadrons of all nations receive a new consumable in an additional slot—Evasive Maneuver—which makes them immune to damage for a short period of time.

These ships will be fully researchable right from the start of the Update. Like other carrier lines, it will take more XP and credits to research them than comparable lines of other ship types.

One final addition to the carrier gameplay for this Update is the “Spotting” ribbon. You can earn these by spotting enemy ships with your squadrons. Currently, only aircraft carriers can earn these.

Arena is back for another Season—prepare your Tier IV ships for battle! This time, we're simultaneously spicing up and optimizing the Arena battles. The spice comes from a new setup we call "Arms Race." This mode is added on top of the now-familiar four-team Arena format. What this means is that the positional war is now fought for more than just the central Key Area—there are now valuable stat boosters located around the map that can improve your team's ships. They will be vital to your success—don't ignore them! 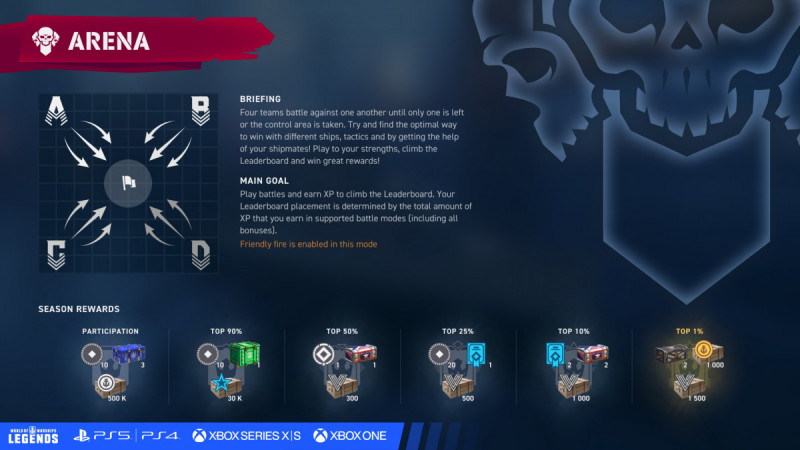 The rewards range from the new USN Battleship Crates to Commander items and, of course, Steel Badges, which will be available for the 50% and higher brackets this time. Check out the dedicated blog post for this Season early next week to find out all the details!

We're updating the main menu to give you a better understanding of your progress in Campaigns and Bureau Projects. 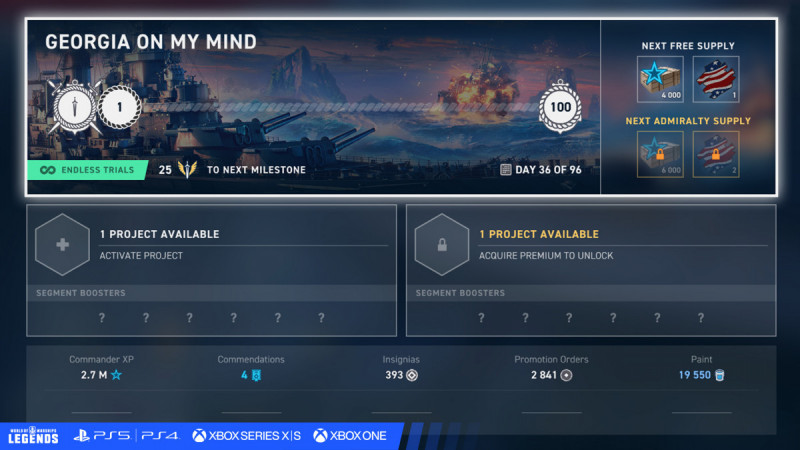 The activities widget will show you the following:

Together with the widget, we're updating the ship filters a bit. You will now be able to filter the ships that can be used for current personal missions, as well as Bureau missions.

A few more balance changes are coming in for a few ships, including the existing aircraft carriers. We're also improving Legendary-tier matchmaking. 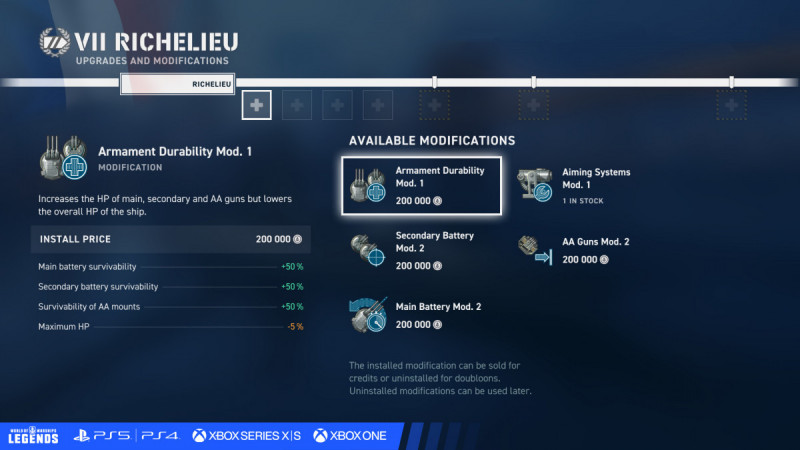 Premium ships in this Update

Follow our news to find out when the ships are released!