Server Maintenance will take place on Monday, July 26. Once the maintenance is close to an end the update will be pushed to the consoles.

We're ending summer with a bang! To make our Second Anniversary extra special, the spirit of our Summer Festival will fuel exciting activities throughout July and August! There's plenty to do, no matter how much free time you've got—from the smallest toe dip to a full plunge, we've got you covered! And while massive anniversary sales are definitely one of the highlights of this Update, there's also a way to get great benefits for the thriftiest among you!

The content shipment is quite significant this time—you can expect two new Tier VII Premium destroyers! One of them is available in the Campaign, and the other—for Global XP (it's a unique ship, too!). Arpeggio of Blue Steel -Ars Nova- —the famous manga and anime that some of you have been asking about for no less than 2 years—arrives in force! And that's just the tip of the iceberg, so read on!

To celebrate 2 years of us sailing together, we wanted to make this Update especially sweet and ensure that everyone will have enough to do and grab! There's loads of stuff to support the festival atmosphere, and we'll soon post a handy guide to all the freebies, sales, deals, and activities going on in the coming 5 weeks! Trust us—regardless of whether you have just a few hours or the whole month, you'll definitely find ways to get excited and busy in Legends! We'll share the links to the guide as soon as it drops, and you can expect something that rhymes with “preasure funt” to arrive in August!

We've seen countless comments about there not being enough high-tier Premium destroyers, so... here you go! Our new Campaign offers ZF-6, a well-rounded German destroyer, as the ultimate reward. This warship is based on a project to complete a captured French Le Hardi-class destroyer. She brings Smoke Generator and offers outstanding ballistics, as well as a solid (for a non-American destroyer) AA suite. As usual, to obtain the ship you need to finish the 100 milestones of the Campaign with an active Admiralty Backing.

Considering that it's our birthday, we didn't make the Campaign any harder than it needs to be, and it’s theoretically possible to complete all the missions during the last week. Once a set of missions appears, they stay available until the end of the Update, August 30. However, each new weekly set requires the previous one to have been completed first.

Below, you'll find the rewards as well as their corresponding doubloon values. The rewards include several "retro" crates, which will also be available through the Bureau and Ranked Battles, but won't be sold. 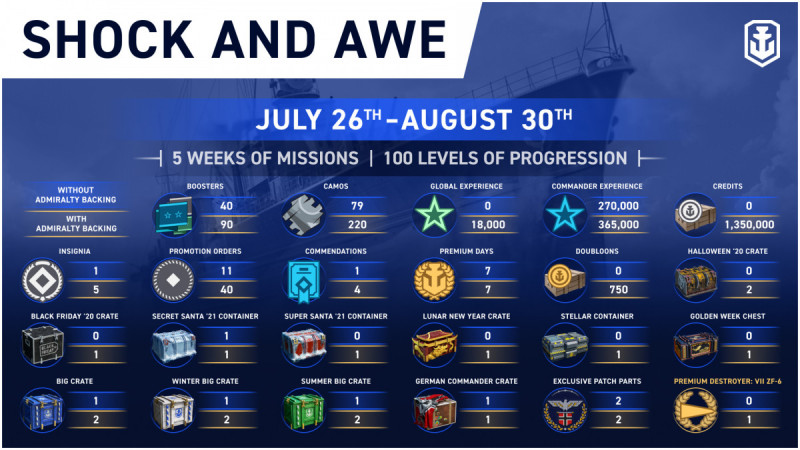 Value of the rewards without the Admiralty Backing: 16,500 doubloons

Total value of the rewards including the Admiralty Backing: 76,665 doubloons

Nevada, Tennessee, North Carolina, and finally, Kansas, can now be researched and helmed into battle at will. While you're probably familiar one way or another with Tier IV to VI ships, Kansas—the top dog of the line—is an enhanced version of Colorado.

She offers a heavy broadside of twelve 16-inch (406 mm) guns, good range, and a citadel that sits below the waterline. She has a pretty tight turning circle, but her speed might be a downer, as she is the slowest Tier VII battleship. Her top speed is just 22.5 knots before upgrades. Kansas also has access to Defensive AA Fire, which is unusual for a battleship. However, to deploy this rare consumable, you’ll need to sacrifice another consumable in the fourth slot, namely Spotter, Catapult Fighter or Enhanced Secondary Targeting.

Perhaps a little unexpectedly, we're adding two new Italian destroyer Commanders, as well as Tier VII destroyer Paolo Emilio, to give them a great vessel to test their skills on! 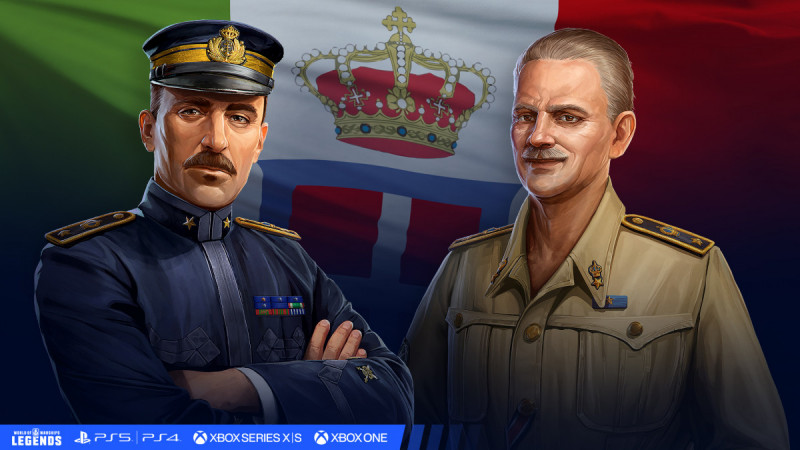 Paolo Emilio is an Italian Tier VII destroyer with a respectable HP pool and easy-to-use guns, as well as quite powerful torpedoes. However, Paolo does lack range, so she has to execute all of her attacks somewhat close to the enemy lines. Keep that in mind before getting her and while looking for the best strategies. The destroyer will be available for 750,000 Global XP.

While we're at it, make sure to redeem the code V2RNY54HK7 at wowslegends.com/code-redeemer to get 2x Basic Crates and 12x Regia Marina Camos! 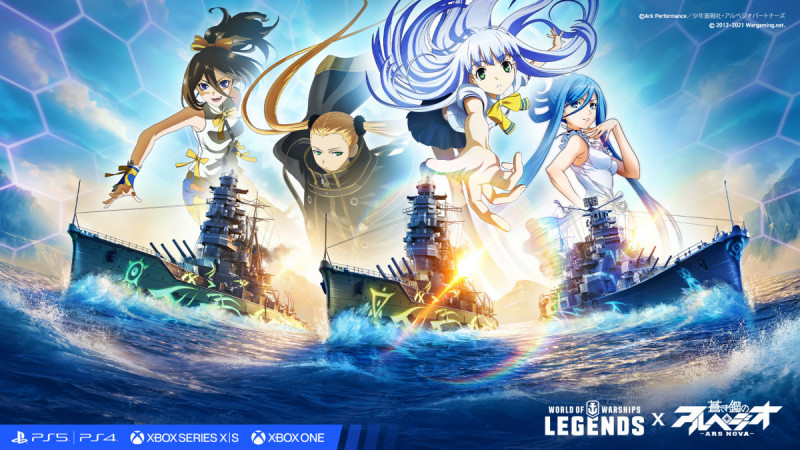 We're bringing a new wave of anime characters to Legends! This time, it's the inimitable Arpeggio of Blue Steel -Ars Nova- ships, Commanders with unique voice overs and skills, and more!

You'll be able to get your hands on up to five Commanders and two ships, not to mention a Crate that can drop any of them, plus a unique Skin for cruiser Atago. Find out all the details in our special blog post and make your choice!

Legendary Birthday in the Bureau

Just like last year, we're introducing a Project to take a look back at the important milestones of the past year. Encompassing most of the new ships and events that appeared or happened during the past year, we're offering multiple "retro" Crates, as well as the special Anniversary Camouflage for most of the Stages of this Project. The Project is currently not time-limited, but it's very likely to become deprecated after a few Updates, so just be sure to start researching it if you don't want to lose it. Please note: Segments that focus on particular chapters of our history will also ask for ships and Commanders connected to those chapters.

This Update features three Seasons of Ranked battles—two of them for the weekend warriors and an extended one for the rest! You can, of course, pick and choose which ones you want to participate in. What's most important this time is that we're venturing forth with ship tiers. To be specific: Season 14 utilizes Tier VI ships; Season 15 goes straight to Tier VII; and Season 16 features a three-league system that will allow you to climb your way from Tier V to Tier VII, with Tier VII also coinciding with League 1 and the most unforgiving ruleset. If that's something you find exciting, you might like this bit of news even more: we're adding the Arms Race mechanic, which worked out well in the last Arena Season, to all of the Ranked Battles Seasons of this Update. Seasons 14 to 16 will begin on July 29, August 5 and August 12, respectively. Find out all the info in a dedicated blog post that we'll share on July 28. 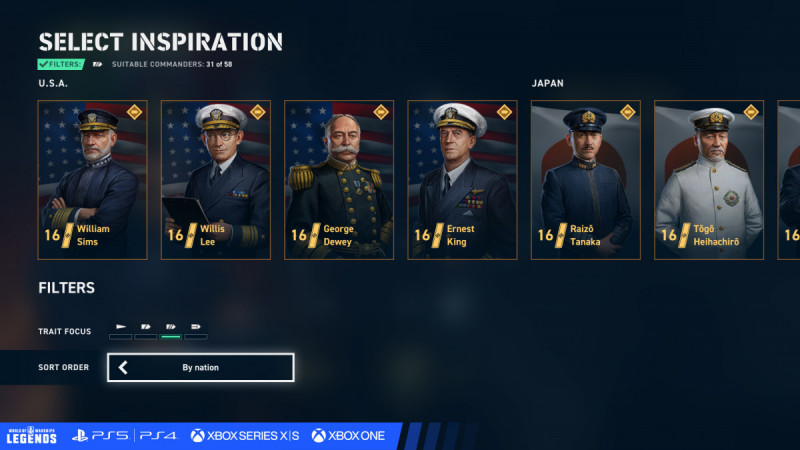