Hello, captains! Welcome to the fair of the year! This year's Black Friday is as good as ever: new black ships, from Graf Spee to Massachusetts, traditional discounts up to 90% off a variety of in-game items and an exclusive flag to top it off! Don't forget about new system for container opening and we have ourselves a party!

Let’s start from the beginning: the content of containers was previously determined at the point you receive it on your account, which could lead to you getting unwanted duplicate ships, for example. Starting with this update, the content is determined at the point you open each container, so the duplicate protection (if it’s turned on) for particular items is now essentially airtight.

Also, we’re test-driving a new system for containers, that will guarantee you a rare reward. If you open 39 containers without obtaining a ship, then you are guaranteed to receive one of the four ships in the 40th container. Any time you receive a ship, the counter towards 40 containers is reset. The described system will only work for Black Friday containers in this update and, depending on the reaction, we’ll probably start using the system for newer containers too. In the guaranteed-ship crate, droprates are allocated to each ship based on their item weight. For all four ships, this is 40% for Exeter B, 40% for Graf Spee B, 16.7% for Le Terrible B, and 3.3% for Massachusetts B. The droprates for the remaining ships increase if you have one of the ships already. 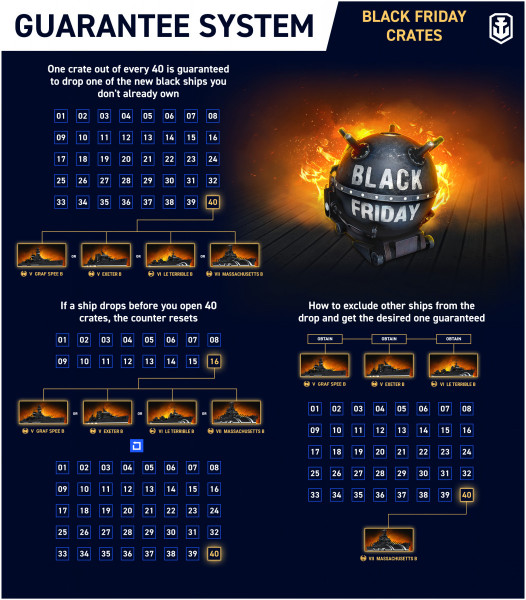 We kinda spoiled the list of the ships above, but nevertheless, this time we have slick black looks for 4 Premium ships: German Tier V cruiser Graf Spee, British Exeter of the same Tier and type, French Tier VI destroyer Le Terrible and US Tier VII battleship Massachusetts. Graf Spee B, Exeter B and Le Terrible B are available on standalone basis or within a bundle, as well as through crates. Massachusetts B, however, is obtainable through crates only, so if you have her three peers, the Big Mamie will drop from the crates guaranteed, no later than in the 40th one. In this case, the timer starts with the first crate you open after getting the last ship of the three. 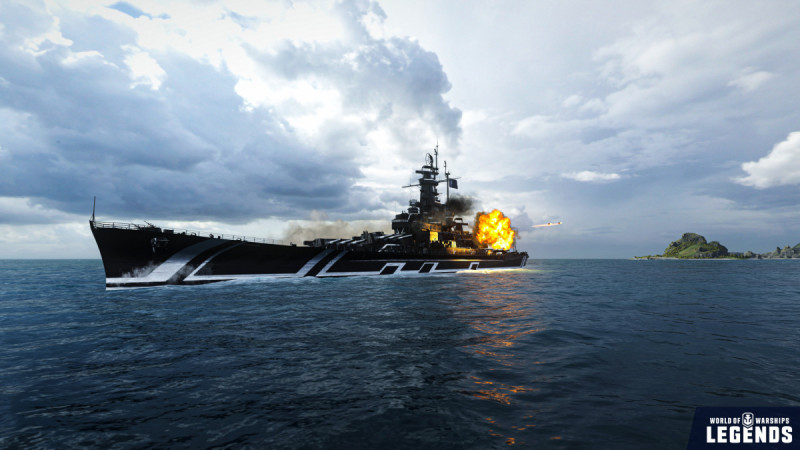 The best part of the celebrations comes in the form of huge deals—during the Black Friday week, naturally. From November 19 through 29, you'll be able to acquire a selection of in-game items with discounts of up to 90%: Commander Progression items, crates, credits, days of Premium Account, and boosters. Don't forget to check out the Store on Friday!

Shop wisely this fall, and turn the tide!