The winter holiday season is upon us, Captains, and we're delivering a massive update to prepare for it—see for yourself! If you're in the TLDR crowd, check this:

Important! This update runs for 6 weeks, until January 31. 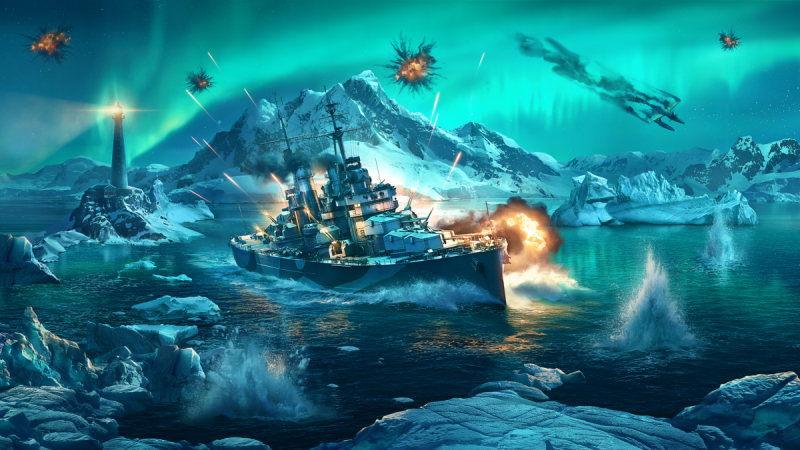 British Legendary cruiser Minotaur is the star of the holiday campaign. The true definition of a heavy hitter, her DPM is significant thanks to how short her reload time is! Minotaur hits hard and fast just like her mythical namesake, despite being limited to AP shells only, and she possesses a very powerful AA suite. With the option to choose between the Smoke Generator and Radar consumables, there are plenty of ways you can support your team effectively!

This is the first time a Legendary ship has been available as the biggest campaign prize, but don’t worry if you end up missing out on getting her! In the first Update of 2022, Minotaur will be waiting for you in the darkest corner of the Bureau… Just don't forget to bring Ariadne's thread!

With Soviet cruiser Stalingrad having recently become available for Global XP, we are not excluding more possible distribution options for Legendary warships in the further Updates.

With 130 milestones over 6 weeks, here's what you can get: 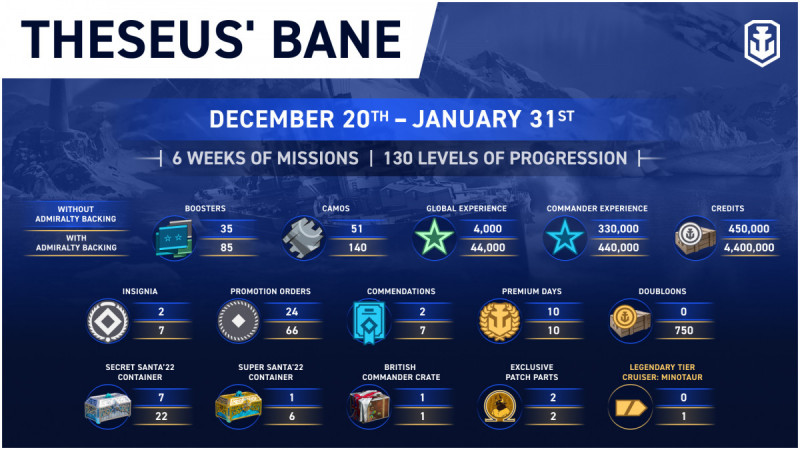 Value of the rewards without the Admiralty Backing: 23,415 doubloons

Total value of the rewards with the Admiralty Backing: 80,638 doubloons

Ever considered trying out that one fancy Legendary ship but didn't want to abandon the Project you were researching? Well, during the holidays, everything is possible if you want it really bad! Here's a full list of Legendary Tier ships of all shapes and types available for rent through Store bundles (2,000,000 credits for the entire duration of the Update, until January 31):

Task Force I (available from December 20) 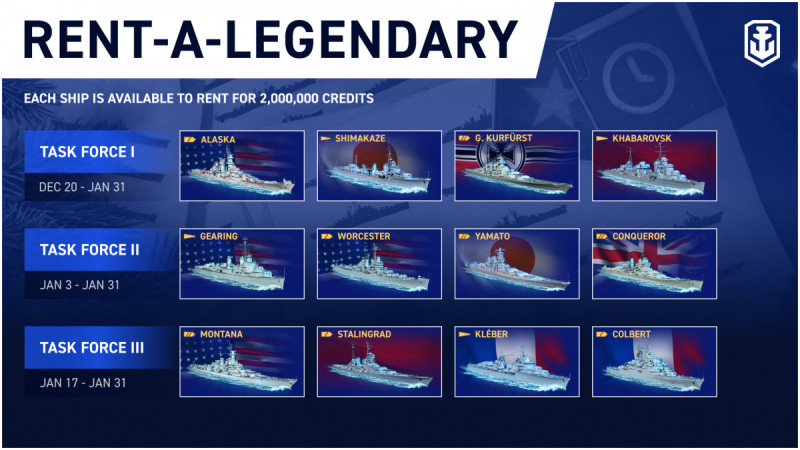 Colbert: a bonus ship to spice up the metagame. This also allows us to test her before assigning to the Bureau. Please note that her stats may be changed before she reaches it, depending on how she performs. It's the first appearance of this Legendary French cruiser named after Jean-Baptiste Colbert, a famous XVII century French statesman. She's a firestarter if we ever saw one—just think Legendary Tier Atlanta. 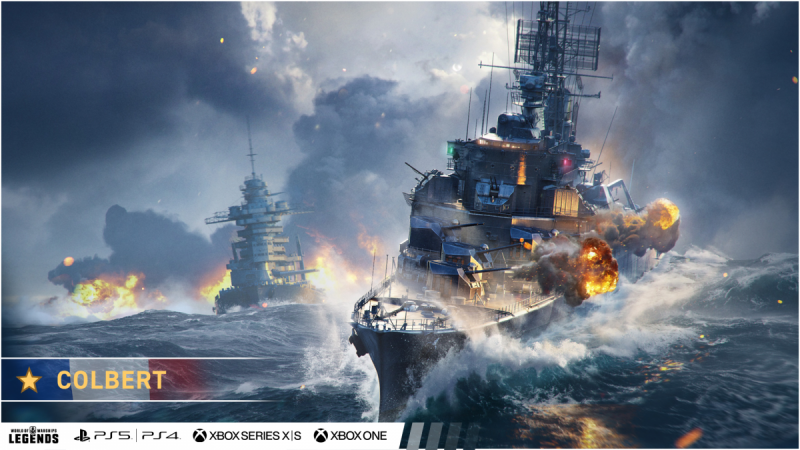 Anyway, it would be great to have someplace to try those Legendary ships AND get prizes too, right? There might be some info on that later in this article, who knows... 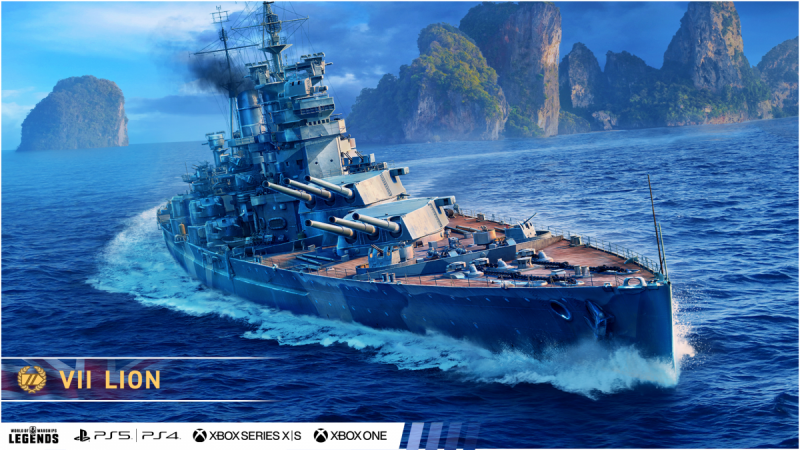 Largely a development of the King George V class, this battleship is bigger, better armored, and equipped with modern 16-inch (406 mm) guns. Lion handles well and offers solid performance with both shell choices. You can get her for 25,000 Winter Coins. To obtain those:

Please note: Lion cannot be obtained for free in our estimations, and at the very least, you will need to acquire the Admiralty Backing and complete the campaign during the 5th week of the Update while also placing in the top bracket of all the Arena seasons. That being said, this is unlikely to be the last time we see the roaring beast.

With this update, we’re introducing a new type of cosmetic content: Commander guises. They change the appearance of your non-event Commanders and include the following visual effects: a signal flare when you sound your horn, colorful tracers for main battery salvos, and fireworks for Legendary skill activation. Guises are intended to bring more content variety and create a wide array of visual and possibly sound design options in the future. 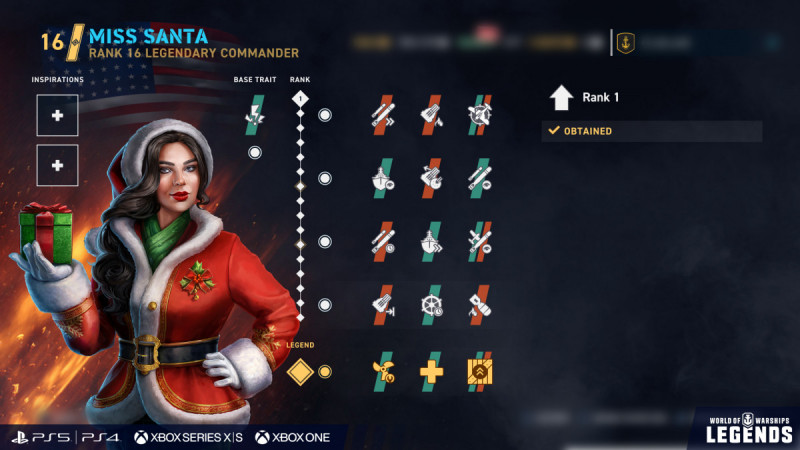 The charming Miss Santa (for American and British Commanders) and charismatic Snow Maiden (for Soviet and Pan-European ones) are the holiday pioneers for this type of content. You can acquire both of them in the Store in exchange for Winter Coins during this Update! Please note: these guises can only be applied to historical Commanders!

Importantly, if you wish to transfer a guise from one Commander to another, you will either need to fight a few battles or spend a nominal amount of Commander XP to make the change. 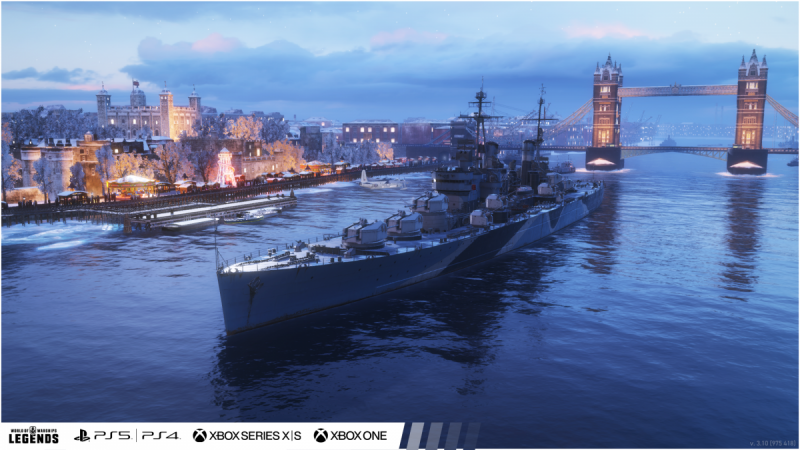 A nice touch to celebrate Christmas and New Year—a new Port! This time, it's the London harbor dressed in festive decorations! Don't forget that there's a photo mode in the Port—you can activate it by pressing LT/L2.

A special web event—Winter Gift Flurry—runs from December 20 through January 10. Get ready for gifts, prizes, and a chance to win a competition to become the best Secret Santa of the holiday season by sending presents to other players! Check it out at hi2022.wowslegends.com! For a detailed look, go through the dedicated blog post.

The winter holidays are a time to decorate basically whatever you can see or reach, and warships are no exception! This year, there are loads of new skins and camos for you to try!

The first batch comes in form of Snow Storm skins for the following ships:

A fair number of themed winter camouflages are in stock as well—both in the Bureau and in the Store. Pick up whichever you like the most!

Additionally, more historical Type 9 permanent camos (Grade I), which you can create using spare Paint (75 Paint each), are set to become available for the following ships:

New Year, new Project—makes sense, right? Within the special Holiday Bureau Project, you'll be able to acquire festive permanent camouflages for Furutaka, T-22, and Normandie; a skin for Vanguard; crates; credits; and more! Make sure to start this Project because it is scheduled to be deprecated right when the next update hits! 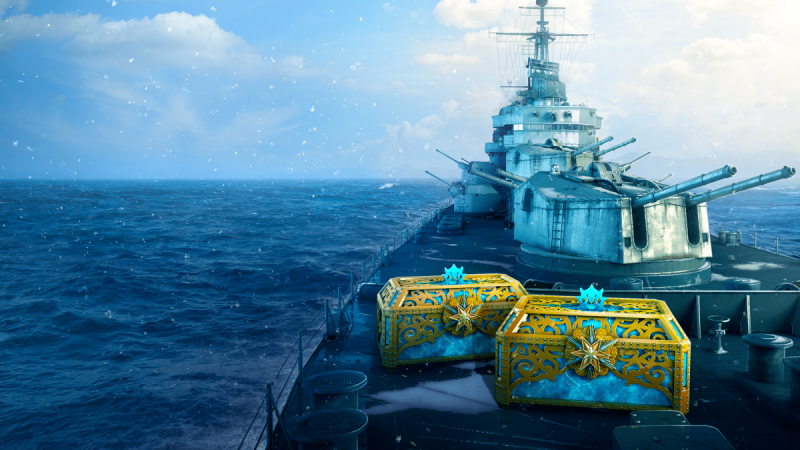 The holiday period is a time for miracles, and for it, we have two special crates—Secret Santa and Super Santa. The latter is especially enticing because it drops a whole lot of different Premium ships from Tier V to VII, and if you're lucky enough to pull a superprize with a small chance, you can acquire such rarities as Jean Bart, Kutuzov, or Belfast! Those come with a solid haul of doubloons, Commander Progression items and a year of Premium account. Among some more common but still not-easy-to-get warships—with bigger chances, of course—you can get Odin, Champagne, Roma, Błyskawica, and others. Secret Santa crates, in turn, will be added to the daily reward ones in the Store from December 20 through January 2, for a total of 14 containers! For a complete breakdown of the holiday bonuses and prizes, keep an eye out for a dedicated article in the coming days.

What's more, a guarantee system is active for Super Santa containers, meaning that you get a ship in at least every 40th crate. However, it is not in use for the rarest ships. In fact, we strongly advise against hunting for those ships intentionally—it is better to simply appreciate them if you get an unexpected surprise! At the same time, the guarantee counter DOES reset if you get one of the superprize ships. That being said, either of the ships may still drop at any point. You can check the exact drop rates for both types of holiday crates here: https://wowslegends.com/containers/.

Remember how we talked about a great place to get prizes and sport your rented Legendary ships and immediately spoiled it in the next paragraph? Well, here we are with three Legendary Tier-exclusive Arena seasons. No other restrictions are in place, the Arms Race mechanic is here again, and battle fatigue hits at 10 as usual, meaning that only the results of your 10 best battles in terms of XP gained are counted towards the Leaderboard daily.

A brief reminder on how Arms Race works: three waves of buffs spawn on the map at certain times throughout the battle, always at similar distances to each team’s spawn points. The buff effects benefit the whole team and can be stacked, so don’t treat them carelessly.

One important thing to mention: in case the battle timer runs its course, the side with the most enemy ships sunk is declared the winner. This rule can create situations where a team can win even having lost all of its ships!

To sum up, let’s find out how the prizes are distributed. Depending on your results (which are calculated considering the total amount of XP earned with all modifiers applied; the winning team players also get 50% extra XP), you’ll be put into one of the six groups on the Leaderboard once the season ends. You can receive Steel, Winter Coins, different Commander Progression items, crates, and more. 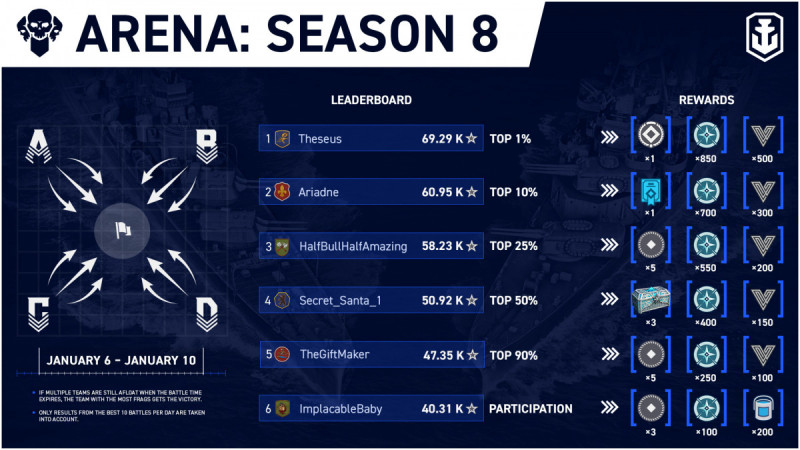 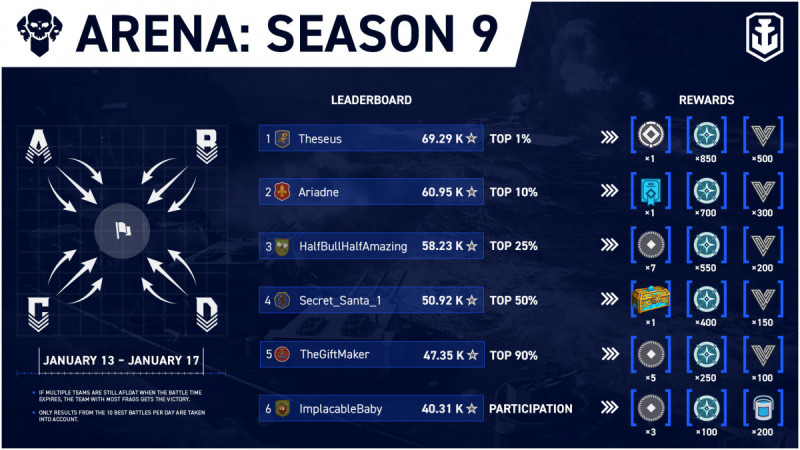 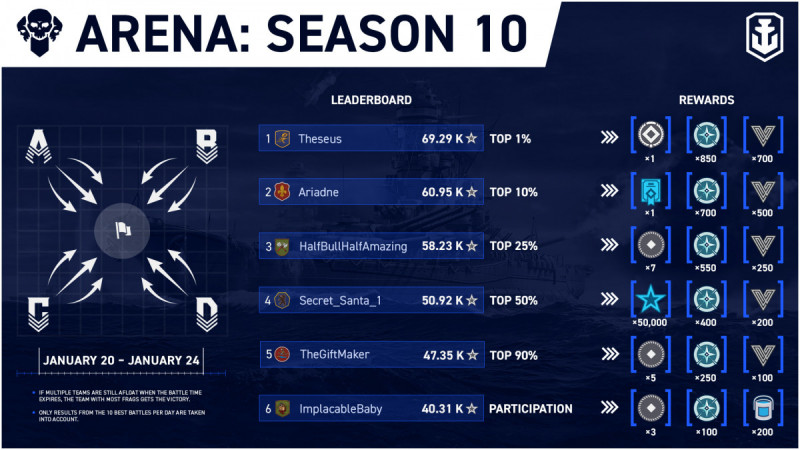 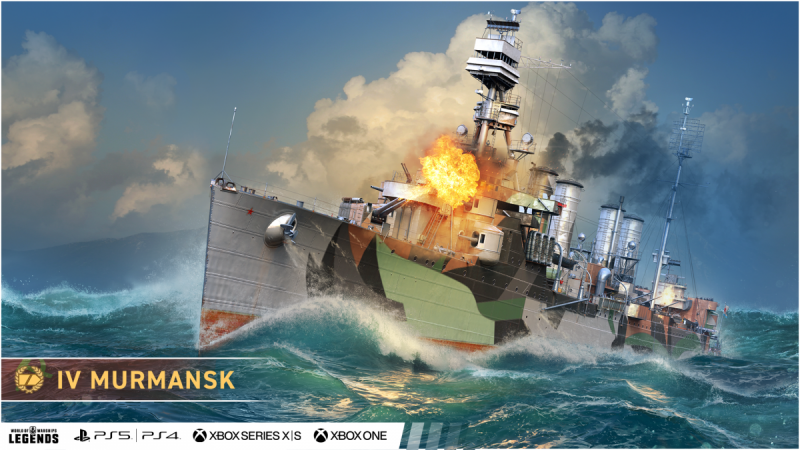 A sister ship of the Omaha and Marblehead cruisers but under the Soviet flag. She is capable when it comes to AA defense and lets you play with American shell arcs, managed by Soviet Commanders, which is definitely a unique combination. Murmansk is available for 6,250 Steel in the Forge from January 3.

Projected in Japan as a large cruiser for longer-range engagements, with 3x3 12.2-inch (310 mm) guns, she's certainly fit for that task. A large HP pool makes Azuma pretty tough while her Repair Party also has a relatively short cooldown, which doesn't make life easier for her foes! She's available from January 10 for 750,000 Global XP.

While there aren't too many individual ships under the scalpel blade this Update, pay close attention to the aircraft-to-ship visibility changes, as they might play (pardon the pun) with our meta.

Kansas is a solid performer, but her maneuverability can be a real hindrance on occasion. Additionally, to give her a little more pep over her predecessor, North Carolina, we're upping her damage per minute with a simple gun reload buff.

We found that Shiratsuyu does suffer in destroyer duels that don't end in torpedo carnage, but the main concern was that her ability to set fires was a little lower than we would have liked it to be, hence this buff.

Gnevny is an object of frustration for many, and it's true that she did lag in key metrics compared to the rest of the line, so we're boosting her damage per second for all the available armaments and looking forward to you making fresh memories with her.

The story of Minsk is quite similar to that of her Tier V sister but on a bigger scale, so to speak, so we didn’t try to invent the wheel and gave her more firepower.

Truth be told, Sinop is not the most obvious choice of Tier VI battleships nowadays, but she's been low-key pulling up in the charts, hence this nerf. We do not expect much to change, except for a few very successful salvos maybe giving her victims more of a chance.

The ship-to-plane and plane-to-ship visibility values have long been a point of contention among you, so we’re trying to make their interactions a tad more realistic, pretty much—just like you asked! This change might be more or less drastic than it looks on paper, so we will eagerly await your feedback!

All containers in the Store received a 'Show details' button, that sends you to the droprate page in one push.

Have a great holiday time, and turn the tide!