Server maintenance is scheduled to take place on June 22, after which the Update will be pushed to consoles.

The first Update of Summer 2020 is set to be quite festive and has something for everyone! We're expanding the cruiser line of the USN fleet with a light cruiser branch, adding a new exciting project to the Bureau, and introducing new ships and Commanders inspired by the Warhammer 40,000 universe! We're also introducing cross-platform voice chat, so you'll be able to deploy your skills in organizing everyone who's willing to engage! Several important balance changes are also on the platter—read on to find out the details.

To begin with the festivities, we're going back to the New York Port, but this time it's all ready for the Independence Day celebrations. See if you can find any Easter eggs! And before you ask, yes—the festive mode is here to stay, right up until the next Update!

Our new Campaign kicks off the American theme of this Update with the new Tier VII USN heavy cruiser, Wichita — a unique ship with a storied and successful naval career. In the game you’ll find her to be quite sturdy and able to withstand a number of battleship shell impacts when angled. You’ll also find her ballistics and shells to be a bit different from any of her USN cruiser contemporaries. During the course of the Campaign, you’ll also obtain several USN cruiser containers. These may just supply your Ports with the new light cruisers—Tier V Dallas and Tier VI Helena! Moreover, Tier VI Premium cruiser Boise is also waiting to be found in one of them. As usual, bigger containers have tangibly better chances of supplying the ships—weigh them against your expectations on our dedicated container page. Other than the containers, you can expect to receive the “Red, White, and Blue” expendable camouflage to adorn any of your ships in the pattern of the U.S. flag, as well as the common boosters, Commander items, and a new campaign currency to spend in the Admiralty Shop: Liberty Bonds. An interesting perk of this particular Campaign is that you can finish it 1 week earlier! We've added some difficult missions that will really test your abilities and reward you with extra Renown—the Shakedown Trials. Prevail in these, and you'll finish the Campaign early, but you can still finish the entire Campaign in 5 weeks if you skip them.

Please note: Tier VII USN Cleveland is not available in this Update, and will be unlocked in the next!

Check the available rewards on the infographic or in the text below: 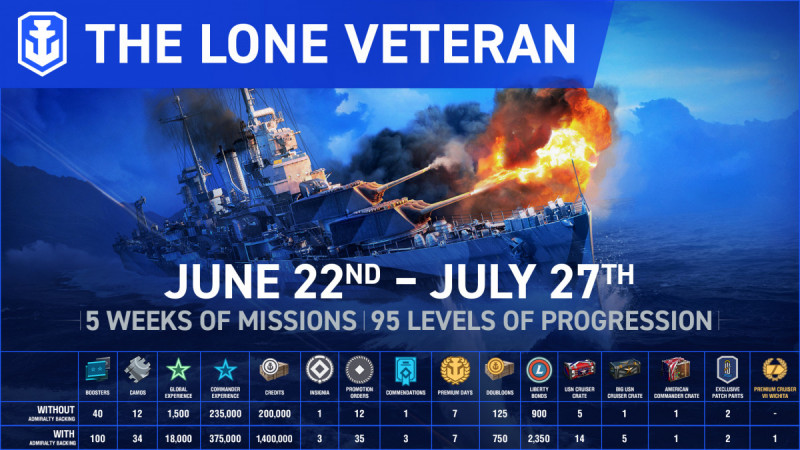 Value of the rewards without an Admiralty Backing: 19,333 doubloons

Total value of the rewards including an Admiralty Backing: 74,283 doubloons 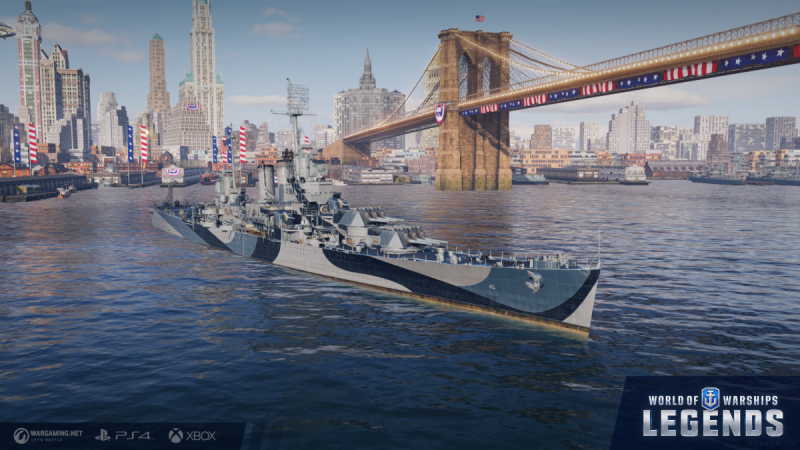 To add even more stars and stripes to this Update, we're literally adding Stars and Stripes! That's right, this new Project features eight Segments that will supply the Stars and Stripes permanent camouflage for several USN cruisers, as well as Iowa. 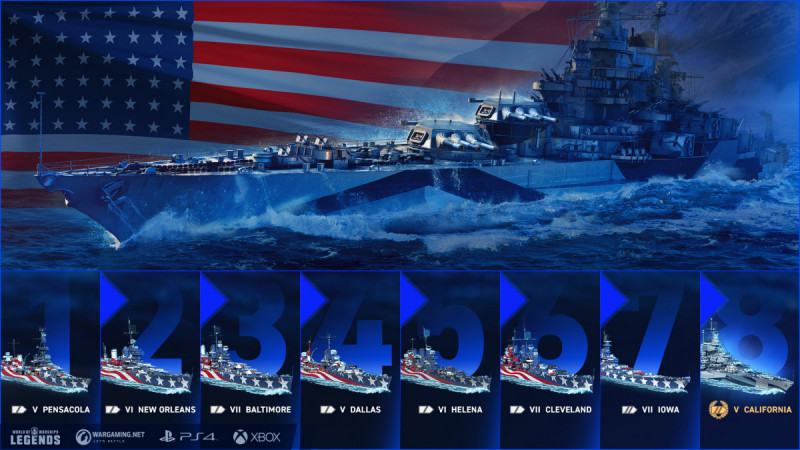 The ships, ordered by Segment, are denoted on the infographic below. Once you're done with the whole project, you’ll also receive Tier V battleship California! This Tennessee-class unit is thick and heavy, and can withstand torpedo attacks with a degree of confidence. She’ll no doubt remind you of several other USN battleships in terms of her other features. Once again, you're free to research this Project at your own pace, as there's no end date for it at the time of writing.

The main rewards for the Segments in order: 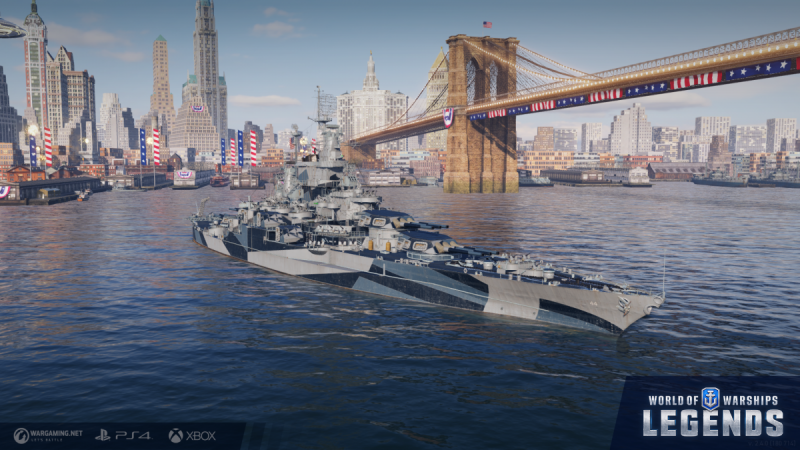 Together with this new Project, we're also making some improvements to the Bureau: 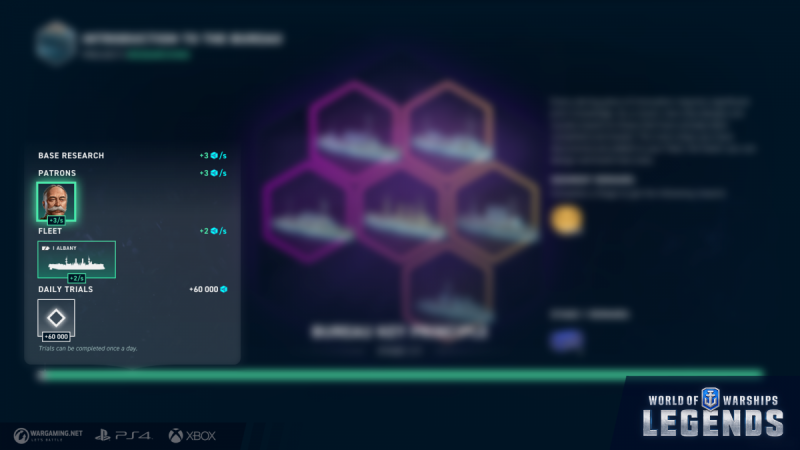 Something you might enjoy during the 4th of July celebrations is another reason to lead your USN ships into battle! The extra victory bonuses will be available for Tier III – VII American ships from July 3 (2:05 AM CDT/7:05 AM UTC) until July 6, (6:40 PM CDT/11:40 PМ UTC). The specific bonuses are as follows:

The future as portrayed by the legendary Warhammer 40,000 universe is particularly grim in the 41st Millennium. We're taking a closer look at what might have been if echoes of that world reached us and enriched the naval battles of the 20th century.

You'll have two new ships at your disposal, as well as two fitting unique Commanders with especially memorable voiceovers and special themed containers for Imperium and Chaos—all of which are exclusively available in the Premium Store. Moreover, both the ships and Commanders can be found in the special themed containers, in addition to expendable camos, flags, and patches.

Choose your side! Ignis Purgatio, an Imperium battleship with Justinian Lyons XIII at her helm, or Ragnarok, with Arthas Roqthar the Cold at her helm! 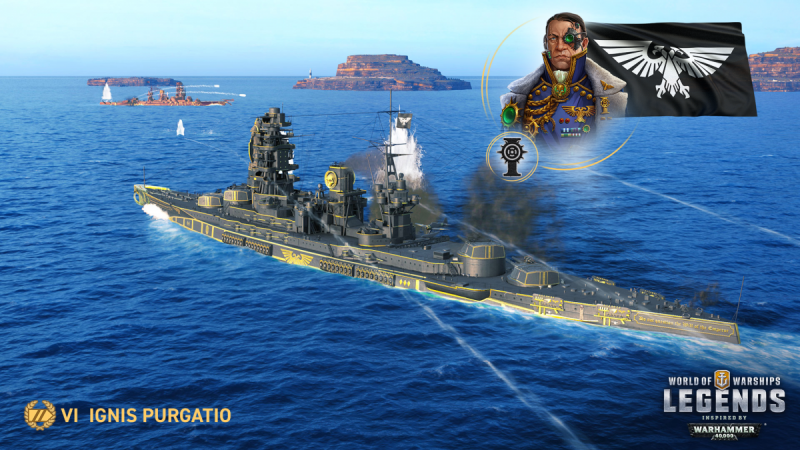 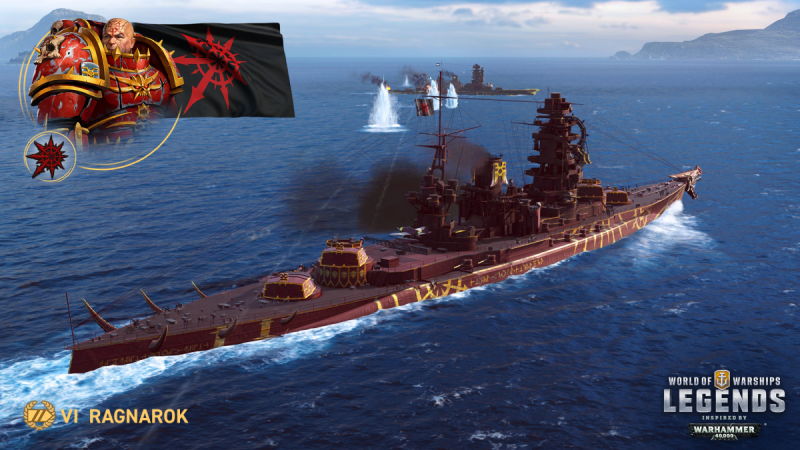 While the new ships are based on IJN Nagato, they feature a more vertically pronounced ballistic arc (similar to American ships), faster gun reloading, and a significantly smaller HP pool, but they are nimbler overall. They do require you to take risks! Please note: Ignis Purgatio does not have access to the Aiming Systems Mod. 1, while Ragnarok does.

The Commanders, meanwhile, offer you a pair of new skills and as many new base traits:

It's here! Any of your teammates who are willing to participate in strategizing and callouts are now able to do so, no matter what console they are playing on. The basic functionality of the voice chat remains the same: you can switch between your team and Division chats, or turn voice comms off altogether. Just a reminder—in battle, voice chat can be switched between "Division," "team," and "off" on the tactical map screen.

Meanwhile, the ability to form Divisions between players from different platforms is still in development, so stay tuned!

We're bringing in more tweaks for this Update to spice things up a little. All of them continue to address Tier VII ships, but fear not—we're on the lookout for overall and inter-tier balance now that Legendary ships will start appearing in battles. So, without further ado:

Another change is coming that won’t necessarily affect balance directly, but modifies the bigger balance/economy picture:

The 25% XP bonus for Premium ships will no longer apply to base XP after a battle, but has been moved to other modifiers. We’ve also increased this bonus to 30% to keep the total XP per battle about the same.

The short version is that the only modifier in the team result table is now victory (+50% XP), and your total XP with the Premium ship bonus is now visible only in the “Economics” tab. This means that Premium ships no longer influence your ranking within a team after battle. This applies to Ranked Battles as well, reducing their impact there.

Matchmaking hasn’t been left untouched either—specifically, destroyers in Tier IV–V battles (with battle tier denoting the maximum ship tier in a battle). The high tier experiment proved successful, so we're spreading this algorithm to more battle tiers. This means that, from this update onwards, whenever you're in such a battle and there are no different tier divisions present, destroyers will be mirrored in the vast majority of cases. Note that, if the search takes too long, you might see a difference in the number of destroyers per team, but these cases will be few and far between. Uneven numbers of cruisers and battleships are allowed in order for this to work.

Other Premium Ships in this Update