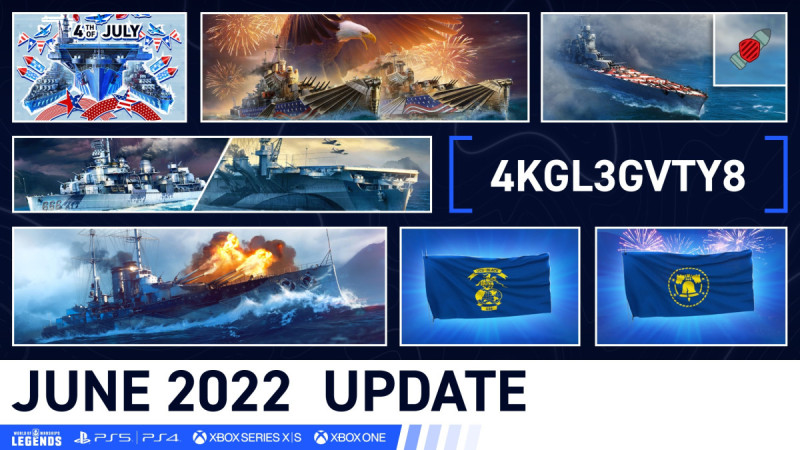 Please note that reading the patch notes without first redeeming the code 4KGL3GVTY8 to get 12x Red, White, and Blue camos and 1x common container at https://wowslegends.com/code-redeemer is strictly prohibited. Otherwise, proceed at your own risk! 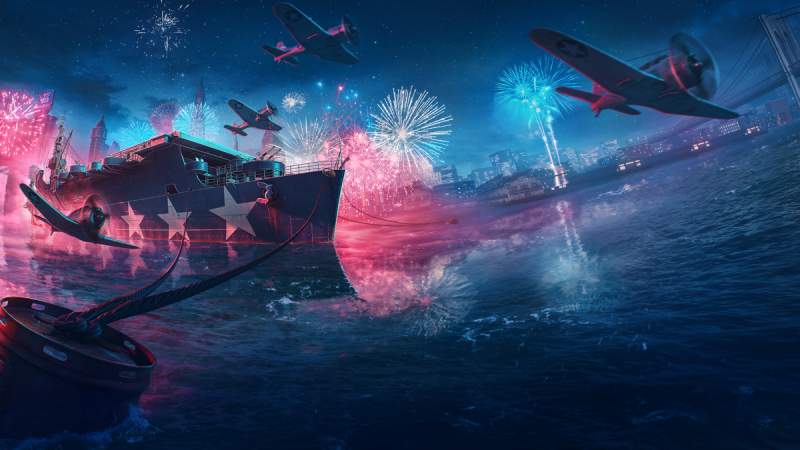 It's time to celebrate freedom! The 4th of July festivities are due this update—here's the full list of activities and content waiting for y'all to check out:

100 milestones, 5 weeks, two ships to choose from. Sounds good, right? This time, you're going to have to choose between USN Tier VII Premium destroyer Black and Tier V Premium aircraft carrier Independence upon finishing the campaign with an active Admiralty Backing. The second ship can be acquired for doubloons. If you're up for a challenge, there's also a weekly set of "Hardmode" assignments.

Black represents a classic American Fletcher-class destroyer, but there’s a twist in the form of Radar, making her one of the best-prepared scouts at her tier! She's also a rapid shell-slinger with quickly traversing gun turrets that sacrifices some (but not all!) torpedo abilities for gunnery. Her large HP pool, overall maneuverability, speed, and powerful AA suite do a good job of offsetting that blemish, however. Keep in mind the high-arcing trajectory of her shells—characteristic of American guns—before going full ahead into battle!

Independence, built from a Cleveland-class cruiser-to-be hull, offers quite a traditional American aircraft carrier experience with a Premium bonus, solid mobility, and squadrons that will allow you to take multiple approaches before having to get more planes airborne. The aircraft restore promptly, and your main concerns are evading AA barrages and not letting the opposing forces find your ship, which has no defenses of her own.

Let's proceed to the prizes: 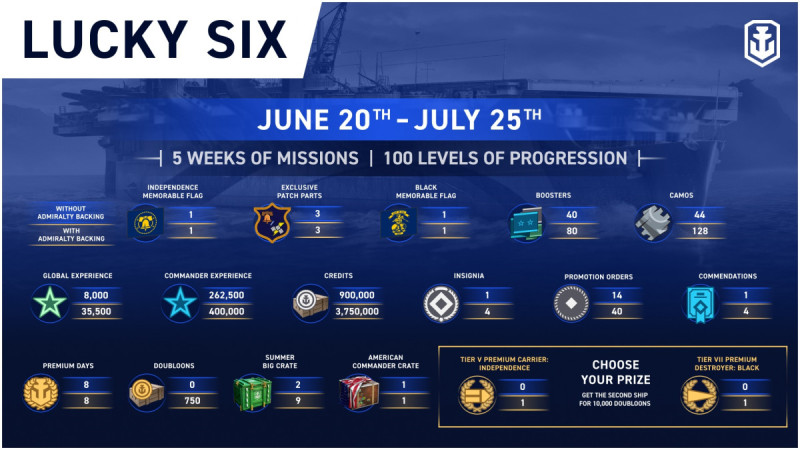 Value of the rewards without the Admiralty Backing: 15,585 doubloons

Total value of the rewards with the Admiralty Backing: 67,690 doubloons

As the campaign includes 100 milestones, if you wish to get everything right away (one ship included), it'll require 27,250 doubloons. The full breakdown of the campaign missions will be available on Monday, June 20, as a standalone blog post. 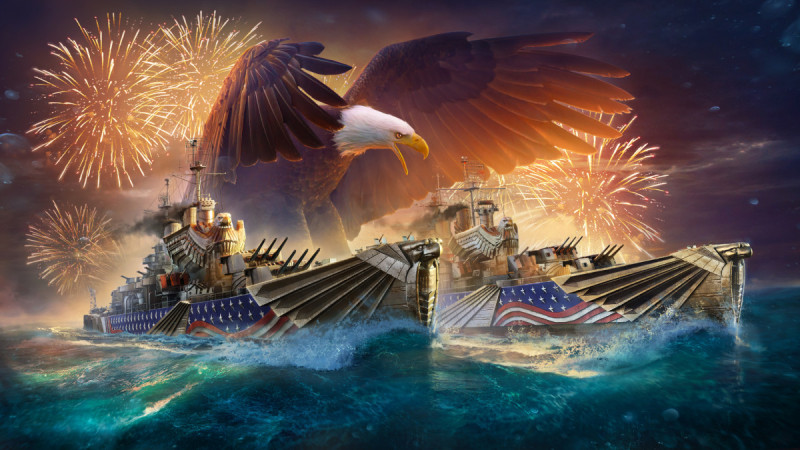 The Broad Stripes and Bright Stars time-limited* project will reward you with gorgeous skins for Tier VII cruisers Baltimore and Cleveland as the final prizes, along with some more themed content on the way to those—namely, Stars and Stripes permanent camos. Please make sure to finish it by July 25!

*Words are important! This project will not get deprecated. Instead, it will be removed from the Bureau altogether. Make sure to get South Carolina as early as you can for boosting the project, and keep in mind that USS Black and USS Independence can also significantly speed up your progress.

Pan-European Fleet Is Here for Good 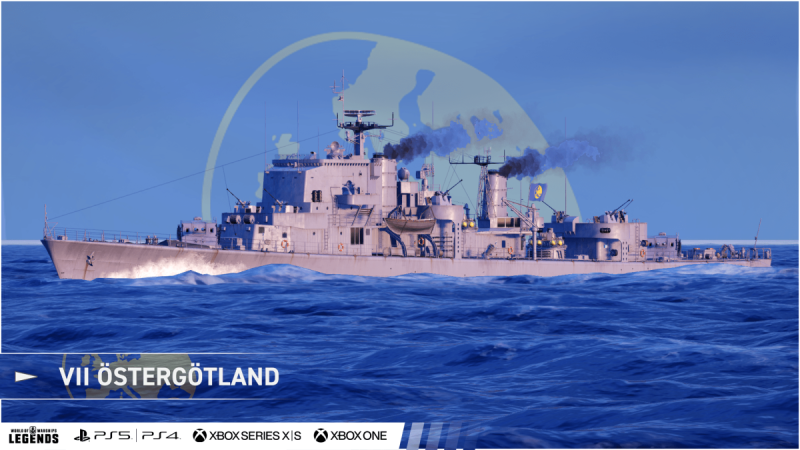 When acquiring ships of the branch, you'll also get the base Commander for European ships—Conrad Helfrich—providing that you do not have him already. Janko Vukovich, the Pan-European Commander for battleships, is also joining the roster. What ship is he going to helm? Read on to find out!

There's also one more new option to get Pan-European Commanders—special crates that drop them are debuting with this update. For more information on the branch, please refer to a dedicated article that covers the line here. 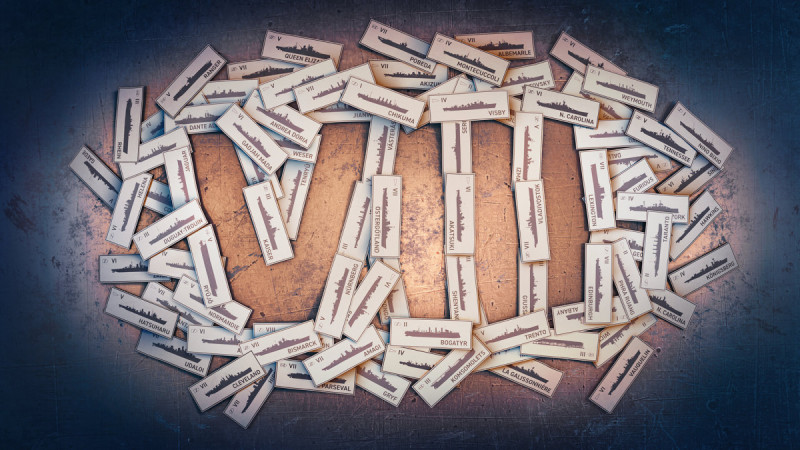 As you’ve probably heard by now, we’re going to introduce a new ship tier to Legends in the near future—and by that, we mean the next update! To prepare for the debut of the new mighty Legends, make sure to fight through special daily missions with Tier VII Tech Tree ships from July 11. These missions will reward you with a solid amount of additional XP and help you prepare your Tier VII ships for a quicker voyage toward the new step. The first batch will cover four nations, you'll find out which ones when you see the mission requirements! We'll reveal more details about the ships as we get closer to their release.

Additionally, the Tech Tree has been significantly overhauled—it has received some interface improvements in preparation for the new paradigm, and the Premium tab has been removed for the foreseeable future because it brought more confusion than order.

We're also introducing some economic changes for higher-tier ships with this update, as follows:

The Tier VII earnings change is perhaps the most fundamental one after the new tier itself. These tweaks will effectively make both Tier VI and VII the “money makers,” with more opportunities to grind the bank. Legendary economics, on the other hand, will be kept as they are—we don't want fluctuations to them, either up or down, and we’ll finetune the numbers at a later time if necessary. 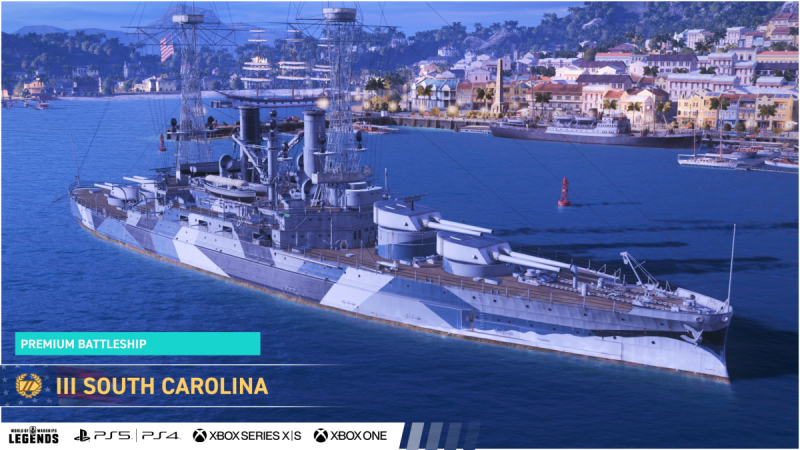 First USN dreadnought battleship with eight 12-inch (305 mm) guns. Slow and steady describes her best—she has perhaps one of the most powerful main battery arrangements at the tier, but this is coupled with a top speed that leaves a lot to be desired. Let's just say there won't be much maneuvering with this beauty.

She’s obtainable with her dedicated flag through a FREE mission that’s available for completion from June 24 through July 25. Pick it up in the Store between June 24 and July 18. Make sure to read more about her and her American peers Black and Independence, both of which feature in the campaign, in the upcoming Through the Spy Glass article. 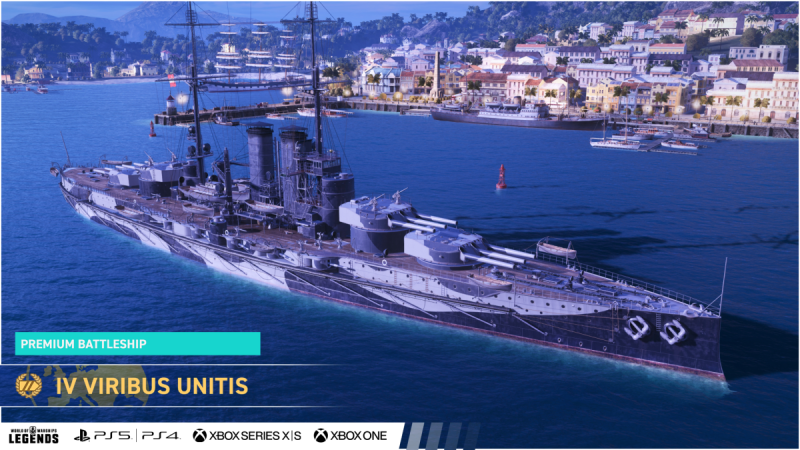 The first and only—at this moment—Pan-European battleship! She boasts a 12-gun broadside, and a new Commander is here to helm her—Janko Vukovich is obtainable in the Store for 900,000 Commander XP or from the all-new Pan-European Commander crates. Interestingly, Mr. Vukovich was the last actual commander of the ship when she was given to the State of Slovenes, Croats, and Serbs in 1918.

Concealment Module is now available for Battleships from Tier VI to Legendary Tier.

Kidd lacks a little mojo, but her performance is just fine at the same time—so we're boosting her AA situationally, if you decide you want it.

Nagato is a frequent subject of battleship performance feedback. She does tend to suffer from the highest highs to lowest lows, so we're giving her a bit more gas to cook with.

Azuma is admittedly trailing behind her closest rivals, mainly by damage dealt, so we’re giving her a straightforward main battery buff.

We're at the point where the data for these Roman warriors is just enough to make the next move, so that's what we're doing! As you can see, we're blanket buffing the researchable battleships with a couple more salvos per battle, and we expect it to give them a bit of an edge both damage- and popularity-wise.

Roma gets a little more of the Ship Buffer 3000 solution because she was starting to show some metal fatigue, and there was no truly good reason to not let her enjoy the Smoke Generator that the researchable newcomers brought.

SAP shells for Italian cruisers (this is a test!)

An optional artillery module has been added for the following Italian cruisers: Tier IV Genova, Tier V Duca d'Aosta, Tier VI Abruzzi, and Tier VI Gorizia. It replaces HE shells with SAP shells, while for Abruzzi, it also increases the main battery reload time from 7.5 to 10 s. This upgrade is free.

We would like to rally all of you who have these ships to try the SAP modules extensively so we can get as much data as we possibly can. Truth be told, we expect the first iteration to overperform, so keep in mind that this is indeed a test, and the final form may be cut down quite a bit—but it's too early to tell! The aim of this addition is to spice up the tactics of both these cruisers and their opposition for more naval variety.

Stay independent, and turn the tide!