Server maintenance will take place on July 27, after which the Update will be pushed to consoles.

Greetings, Legends! This August marks a year since our full release! We're introducing several activities to celebrate it: a new Campaign, more ships in Early Access, USS Cleveland joining the USN light cruiser branch, two seasons of Ranked Battles, and a new project in the Bureau! But it doesn't stop there! We're also bringing three new maps and an update to the quick command wheel featuring–wait for it–ship horns! And did someone say "Spotters"?

This article is also available in Mexican Spanish and Brazilian Portuguese, which means that the game client is, too! Expect more materials to be available in those languages over time! Please note: voiceovers are not yet available for Mexican Spanish, but will be delivered in the next Update.

This August, we're summoning a Norse god! Specifically, Tier VII German battleship Odin, the pièce de resistance of the Update. Odin features German turtleback armor, the Sonar consumable, 305 mm main battery guns, and a pair of quadruple-tube torpedo launchers. In many ways, the ship is reminiscent of Scharnhorst, but sufficiently powered to occupy Tier VII. As usual, the ship can be obtained by completing the whole Campaign with an active Admiralty Backing (2,500 doubloons). The Campaign spans 100 milestones and consists of a single Weekly Havoc mission that refreshes every Monday. The breakdown for the Campaign missions will be available in a couple of days.

As you move along the milestones, you'll receive two types of new containers and a new currency, as well as the typically desirable goods and a new personal patch. The containers are the Big and regular versions of the new French Destroyer crate, which may hold the new Tier III–VI French destroyers. We'll cover them in more detail in the next section of this article.

The currency, Continental Bonds, is for use in the Admiralty tab of the Store. You can exchange them for a range of goods that includes consumables, Commander items, and the new regular French Destroyer crates. Any Liberty Bonds left over from the previous Update can be spent on standard USN Cruiser crates. They will be converted into credits in the next Update. 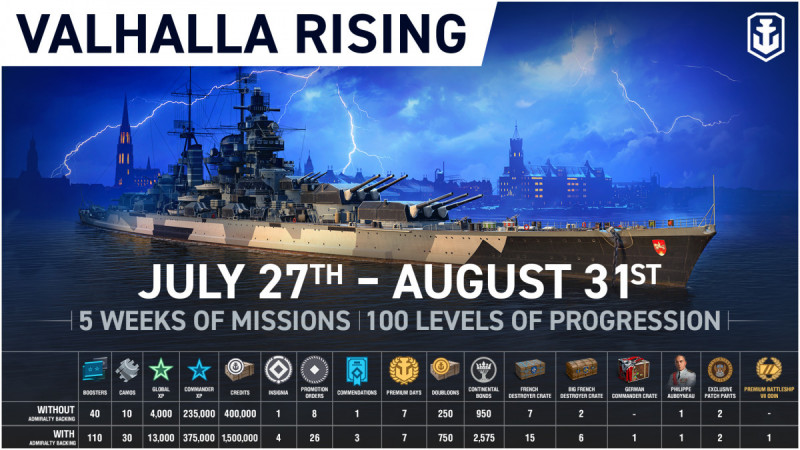 Value of the rewards without the Admiralty Backing: 22602 doubloons

Additional rewards you can get with Admiralty Backing (2500 doubloons)

Total value of the rewards including the Admiralty Backing: 82,470 doubloons

The latest line of ships to arrive to Legends is perhaps the fastest yet! French destroyers feature overwhelming speed and substantial main armament that fires at a fairly flat trajectory, enhanced by the Main Battery Reload Booster consumable at higher tiers... Sounds impressive, right? What they don't feature, however, is Smoke Generator. That's right, high speeds and active maneuvering are your prime tools to avoid enemy attacks with these nimble ships, all while raining fire down on your attackers. This is a high risk / high reward proposition, so be ready to minimize your reaction time. As an extra measure for use in close encounters, the French line does of course have access to torpedoes, but their range is limited, so in most cases they will be a weapon of last resort. 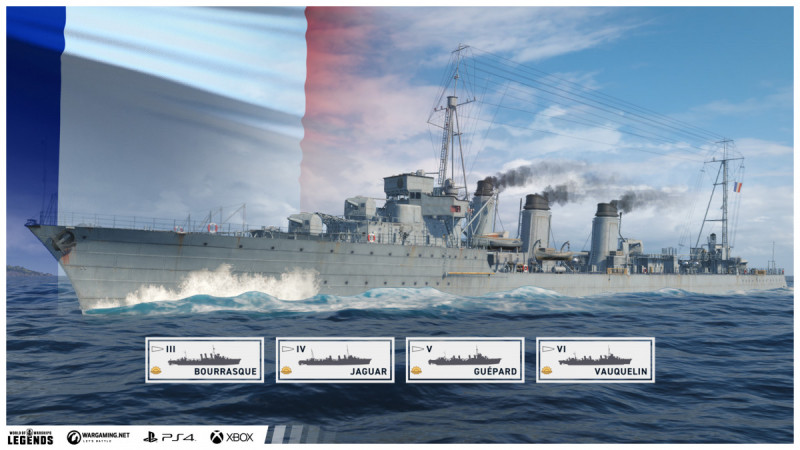 During the Anniversary Update, these ships are available in crates only, with better chances of receiving ships from the Big version of the French Destroyer crate. You can find the probability percentages for the different crates here: https://wowslegends.com/containers.

You'll also get a personal mission for each ship you receive. Completing these missions will reward you with some past containers, as well as doubloons.

Please note: Tier II Fusilier and Tier VII Le Fantasque are not available in this Update, and will become available to research in the next one.

Tier V Dallas and Tier VI Helena found their place within the Legends meta quite comfortably, so now it's time to welcome the pinnacle of the USN Light Cruiser branch—Cleveland—which is incidentally the most numerous cruiser class ever produced. 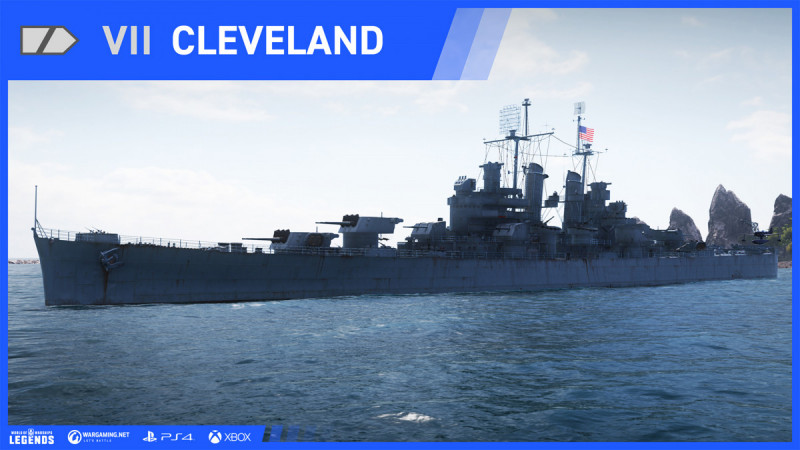 In the game, Cleveland features shells that fire in a high arc, quick-reloading guns that allow for full salvos at great angles, and a nearly submerged citadel. The citadel however, is still vulnerable to plunging fire. Cleveland could be described as a glass cannon extraordinaire. She can hurl projectiles at an enviable rate and set fire to enemy ships, but should you find yourself exposed, you might be in for a quick return to the Port—she can’t effectively withstand direct damage. While the arcing trajectory of her shells allows for great use of cover, it can be both a blessing and a curse, as it can make hitting a particularly swift target difficult. The ship's best defense will come from correct use of the Radar and Sonar consumables to prevent unwanted encounters, as she is not the most nimble of light cruisers, either.

It's time to battle it out and rise in rank once again! Season 6 will make use of Tier V ships, while Season 7 sees a return to Tier VI.

As you might remember, the last Update marked the uncoupling of the Premium ship bonus from the team result table, so Premium ships no longer affect your standings in the team table. This means that you won't lose out by using a researchable ship in any way, apart from the total earnings you might accrue.

The basic rules for both seasons are:

The available rewards include various crates, including some that are no longer typically available; doubloons; boosters; experience; and special seasonal patches. You can check out the full list of rewards in the game.

Anniversary Project in the Bureau

The new Project, entitled "Legendary Birthday," is designed to be a retrospective into our short-but-rich history and pay homage to every major milestone, be it the release of a new ship line or a special event such as Saving Transylvania. While completing the Project, you'll find all kinds of crates, including Halloween, Santa, Black Friday, and various national crates. 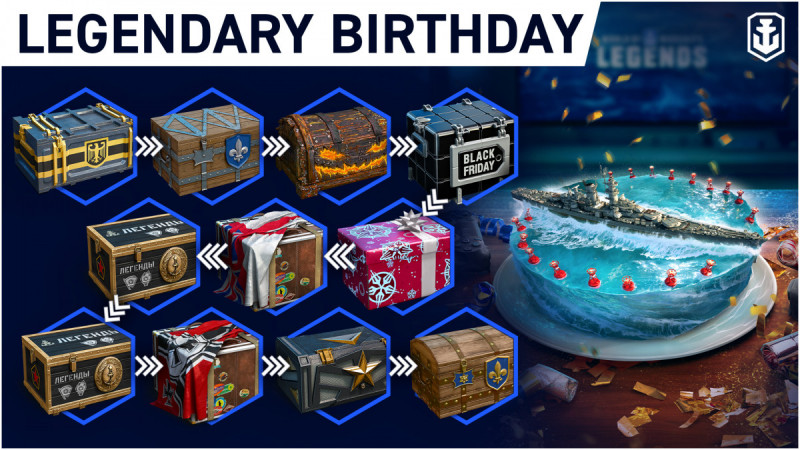 There are some specific ship and Commander requirements in some of the Segments, as a nod to the Update in which that content was available, but keep in mind that this Project is not time limited. You’re free to complete it whenever you feel like it. What's particularly interesting about the crates within this project is that the Soviet, German, and U.S. crates offer chances to get Premium ships that were not available in this way before. In particular, the Soviet crates may contain Okhotnik or Poltava; German crates—Admiral Graf Spee or T-61; and U.S. crates—Marblehead or Boise. Once again, you’ll be able to find the exact contents and drop probability here: https://wowslegends.com/containers. 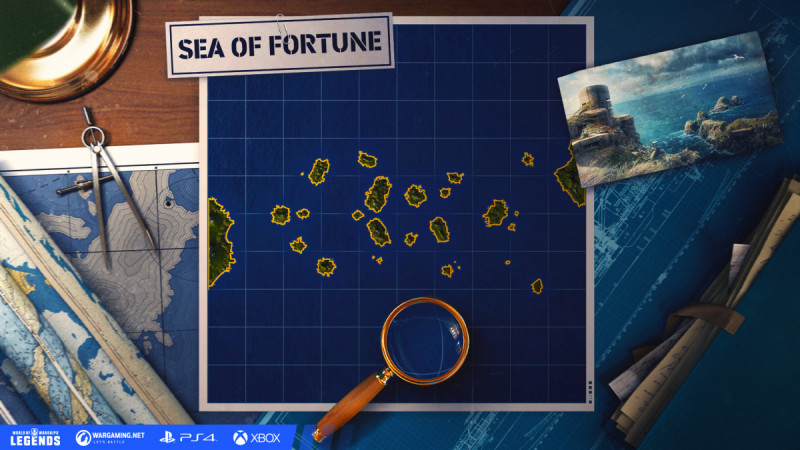 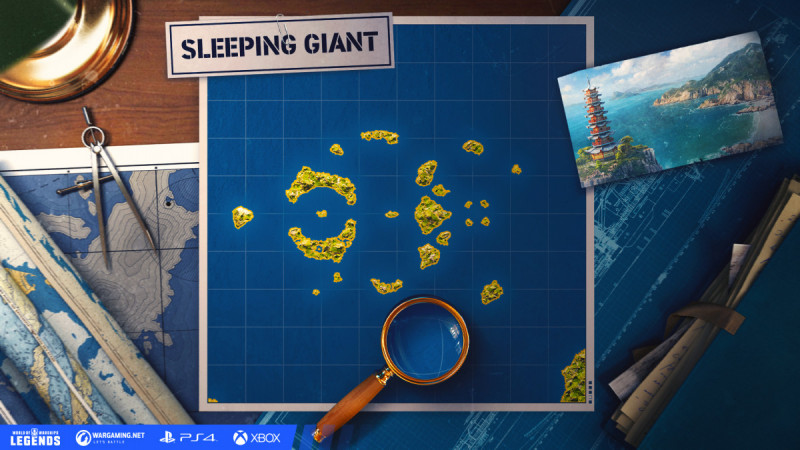 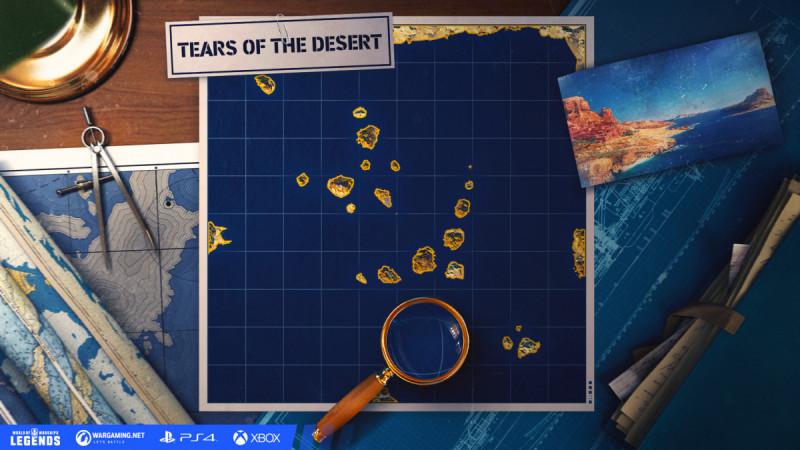 All of these new locations are decently sized to accommodate the biggest ships, and are going to join the Tier VI Legendary-Tier battle rotation. We kindly remind you that “battle tier” denotes the maximum tier of ships in a battle, meaning that Tier V ships will also find themselves on these maps from time to time.

Starting with this Update, all battleships that have Catapult Fighter available receive a choice to replace the consumable with Spotter (plane). The effect of this new consumable is simple: the accuracy of your ship's main battery improves by 10% while the plane is in the air. The default duration and cooldown values for the Spotter are 30 and 200 seconds, respectively. Please note: the consumable affects any salvo that is launched during its duration, i.e. if you shoot and the plane lands a second after, your salvo will still land with improved accuracy.

The Spotter behaves in the same way as the Catapult Fighter, so it can spot torpedoes and enemies at short distances. Air combat capabilities and HP values of both planes are the same as well, so they are capable of withstanding AA damage in a similar manner.

The Spotter consumable doesn't affect the camera perspective in any way.

The quick command menu has received an update! We've reworked the original wheel (or pizza!) a little bit, as well as added an extra one for social interactions. 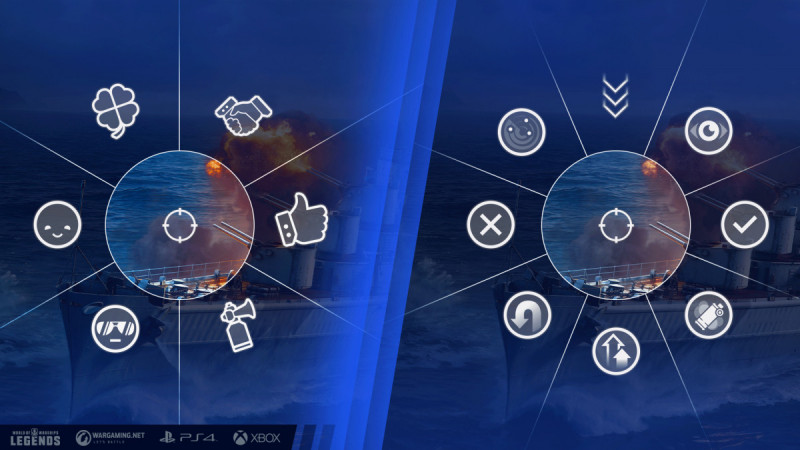 Moreover, any commands from the combat wheel are now registered in the log box in the left-middle part of your screen. Finally, we've added a ship horn as one of the commands. The spam filter is also now a little stricter, so we ask you to show restraint when using the commands!

Each week of the Update, we’ll have a sale of special event items, including Halloween 2019 Commanders and crates, Azur Lane permanent camouflages and Commander containers, and Black Friday 2019 ships and containers.

Moreover, there will be a sale of Premium ships. Each of the thematic sales will last a week, while some may extend to two. Furthermore, each week we’ll offer you a mission chain that will allow you to get some of the themed containers for free! To find out which event is on and when, check out our social media channels and the promo slides in the game launcher.

Important: for the first time in Legends' history we’ll offer a discount on Elite XP to Global XP conversion—35 XP instead of the usual 25 per doubloon. This special will last from August 12 to August 17, so if you’ve wanted to get a Global XP ship for cheaper, this will be your chance!

The only new ship in the Premium Store this Update is Tier V destroyer HMS Gallant. 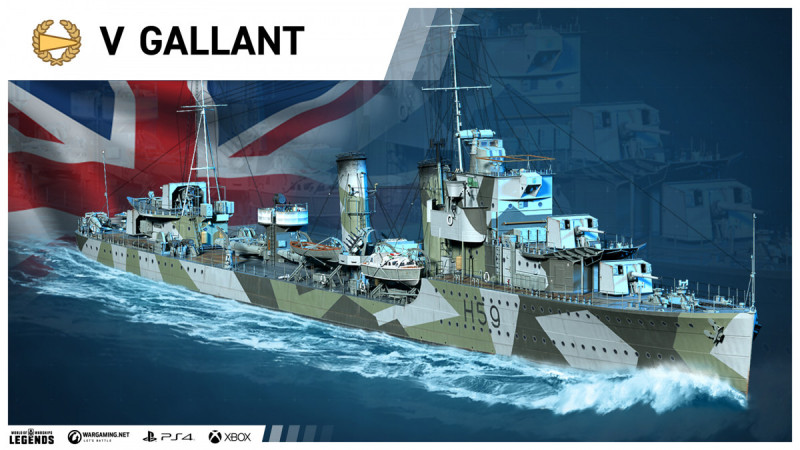 Follow our channels or watch out for promo slides in the game launcher to find out when the ship comes out!