For those who prefer swift actions to long words, here's a perfectly cooked TLDR section: 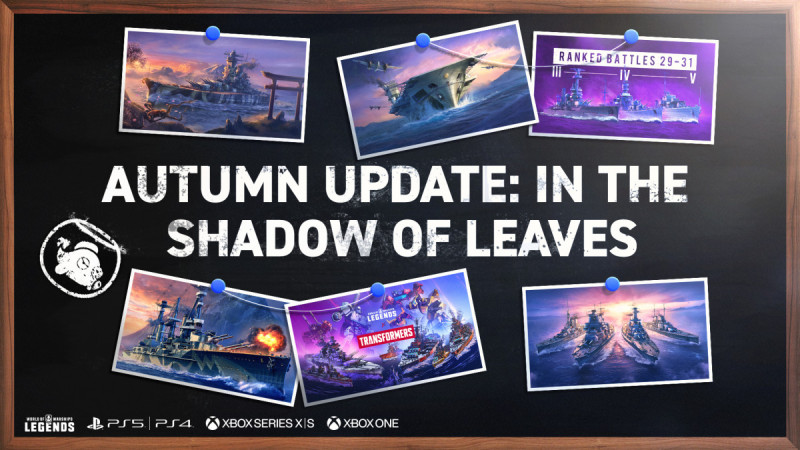 Before reading on, redeem the code R2KAR9K26X at https://wowslegends.com/code-redeemer to get 2x Common containers. 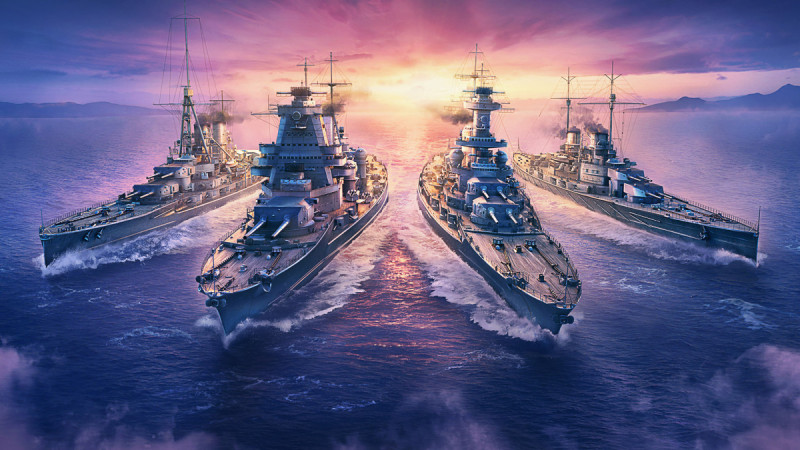 More ships; more lines! This update is marked by the incoming range of German alternate battleships. It includes: 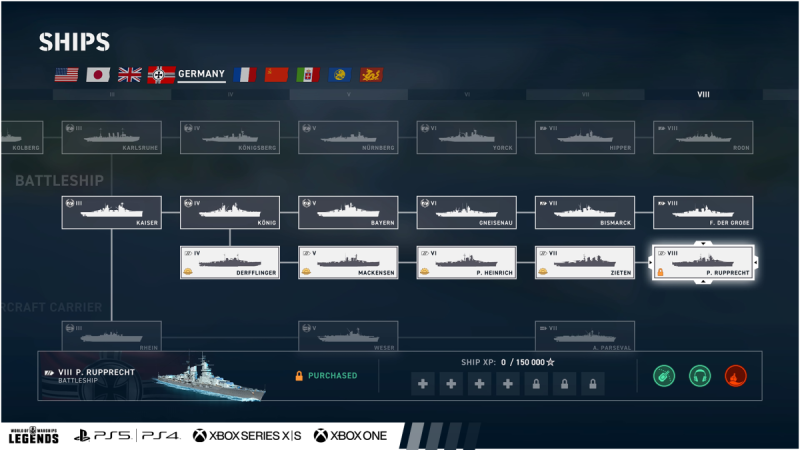 The new German battleships are all about enhanced secondaries, with some of them, as you might already know, carrying torpedoes aboard. Sonar, available from Tier V and up, is one more reason to try these beasts out!
The Early Access framework stays the same: You can get the new ships from German Battleship regular and Big crates, with one important addition being the inclusion of a Tier VII ship. The branch-topper—Tier VIII Prinz Rupprecht—however, will arrive with the next update, marking the line going researchable. Please note: The crates will be available from September 1. 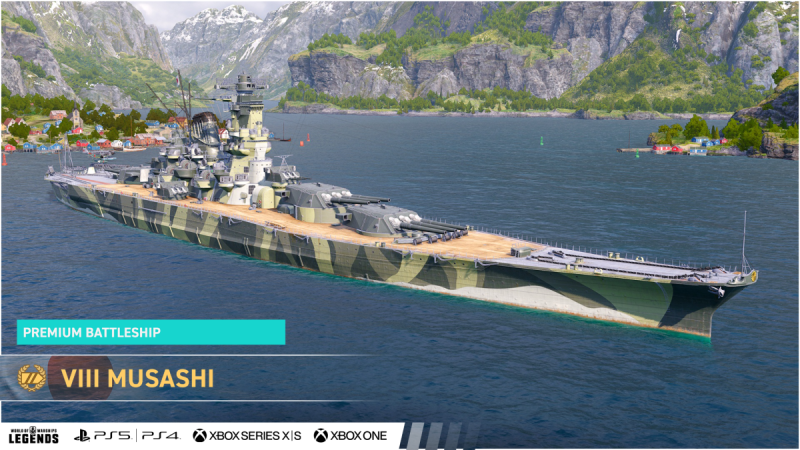 It's time to take some steps on the warrior's path! There's an enormous (we mean it) reason to do so, waiting on the mountaintop: Japanese Tier VIII Premium battleship Musashi, Yamato's famous sister ship. If you like to go big, she's your choice, since the ships of the class were the most powerful and humongous battleships ever built. Musashi brings to the table mighty 18.1-inch (460 mm) guns and a massive amount of HP.

The structure of the campaign remains the same: 5 weeks of progression and 100 milestones with the catchup mechanic available. Heroic Effort missions for seasoned salty seadogs are in place as well. Let's check out what prizes being loyal to the Bushido code nets you! 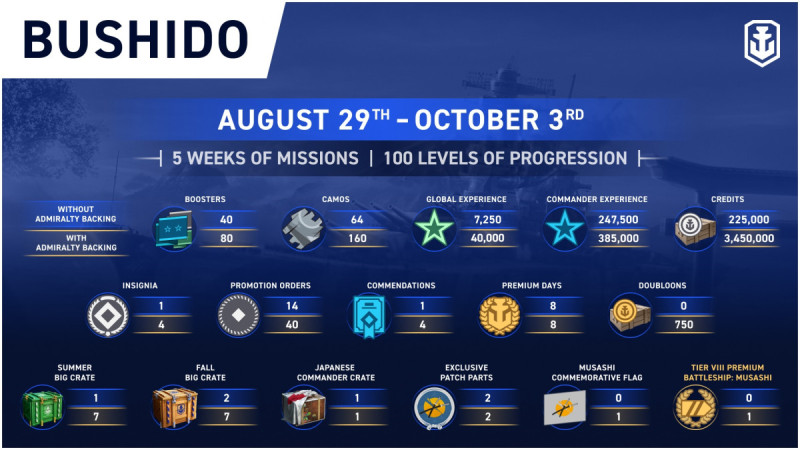 Value of the rewards without the Admiralty Backing: 18,195 doubloons

Total value of the rewards with the Admiralty Backing: 75,600 doubloons 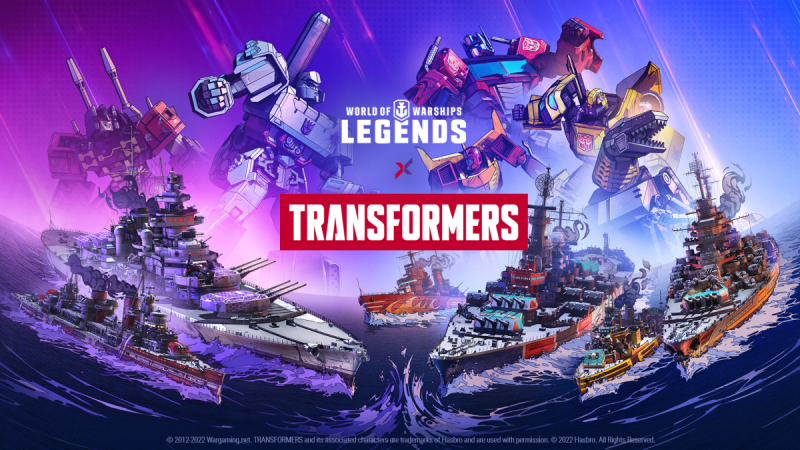 The TRANSFORMERS robots are back! This time, with very solid reinforcements in the form of Legendary ship skins (and one more for Tier VIII République). More good news—each and every item from the previous arrivals of the collaboration will be available from September 1 throughout the update, until October 3. That includes Commanders, ship skins, and containers.

© 2012-2022 Wargaming.net. TRANSFORMERS and its associated characters are trademarks of Hasbro and are used with permission. © 2022 Hasbro. All Rights Reserved. 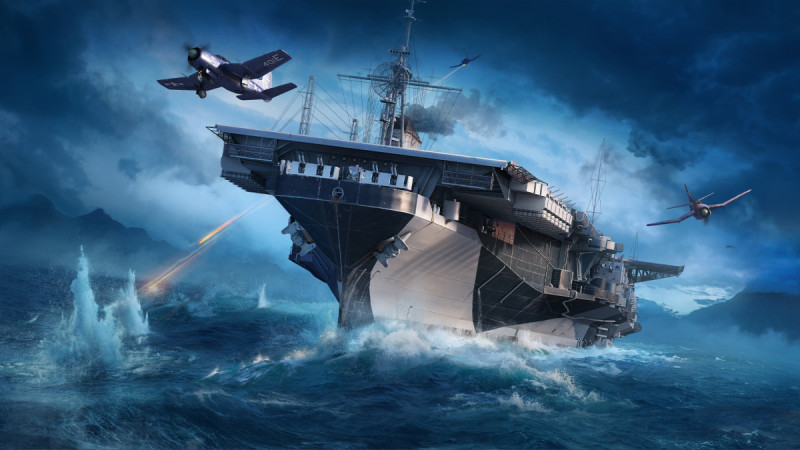 Start your path to the skies today with Legendary monsters coming in the form of two separate Bureau Projects—the highest-tier newcomers are USN Midway & IJN Hakuryū. Both Projects are obtainable from the Store for credits or doubloons, and they are here to stay! However, the option to purchase them for doubloons will cease to be available once the next update arrives, so please take that into account when planning your resource spending!

Midway is the ship with the biggest HP pool compared to all of her aircraft-carrying peers, and her bombers provide long-range torpedo strikes. Hakuryū brings fast planes with extremely short squadron restoration times, allowing for more strikes during battle.

...with seasons 29, 30, and 31 awaiting us in this update! 4v4 battles, no carriers, only one destroyer per team—it’s the perfect opportunity to show off your skills and earn some prizes, including Steel, Commander Progression Items, and more! Stay tuned to find out more in the upcoming dedicated blog post before the first season starts on September 1.

Save the date: On September 5, Legends will become available for Captains in Canada and the Philippines via their mobile devices. Accessing the game from mobile will allow you to use almost the entire list of features that consoles provide, except a few—most importantly, aircraft carriers—with matchmaking being fully cross-platform. We'll announce more details down the line in a special blog post. 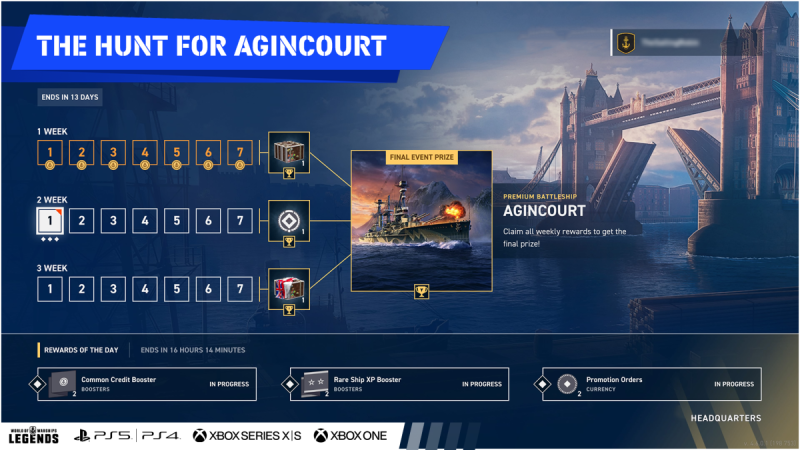 Welcome the first (hopefully of many!) special in-game event! Your assignment is pretty straightforward—log in each day, starting September 12; complete dedicated tasks (any that you miss can be retrieved for small sums of doubloons) for 3 weeks; and get an array of goods. The ultimate prize waiting for you in the end of the week 3 is Royal Navy Premium battleship Agincourt! You can read more about her in the next section. 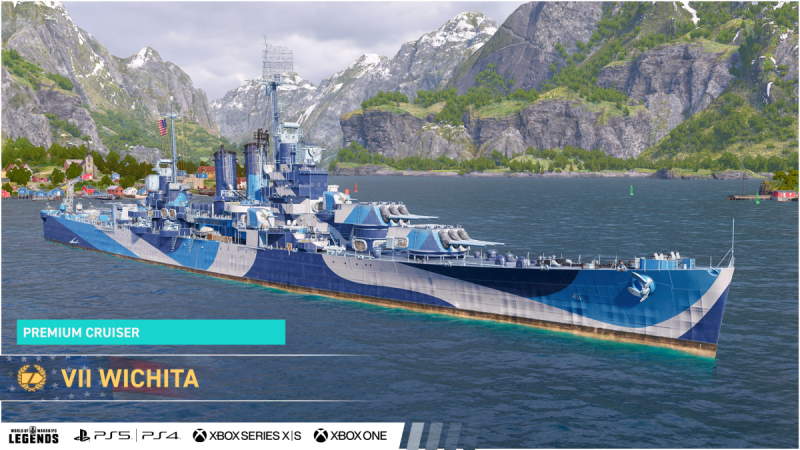 The release of this ship marks a new approach regarding some of her peers, considered by the game design team—and many of you—a bit too good to oversaturate the game with. We decided to “retire” some of those, essentially confirming that they are not going to be available anymore in their current forms and are going to be now referred to as "Collector's Edition," or simply “CE” versions. However, the new versions of these ships will be obtainable for both their owners and any Captains who don't have such boats, with some tweaks to their stats.

Wichita is the first of the batch, with her revamped version coming to the Store on August 29, with no time limit set for her availability at present. Expect the following infamous ships to get the same treatment in the coming updates, but note that the list might change:

Differences between Wichita CE and the new Wichita: 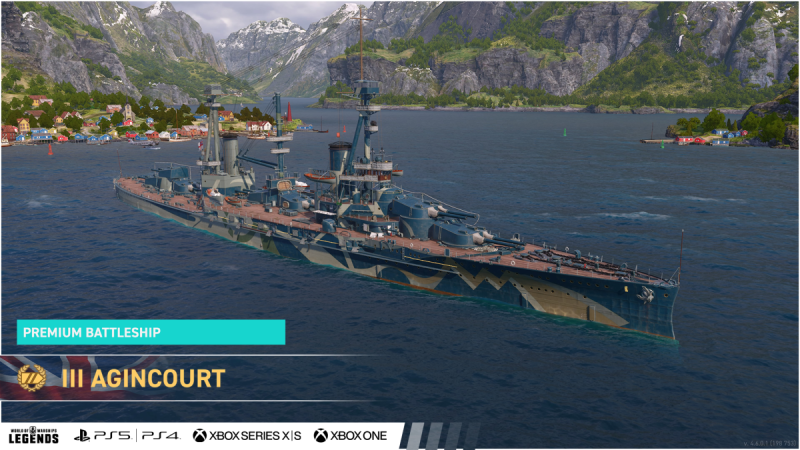 This ship was ordered by Brazil, purchased by the Ottoman Empire, and requisitioned by Britain when WWI started—serving proudly in the ranks of the Royal Navy until 1921. Quite a journey! Her version in Legends provides fourteen 12-inch (305 mm) caliber main battery guns and the joint-best secondary gun range at her tier with a 5 km range, but she lacks AA armament entirely. 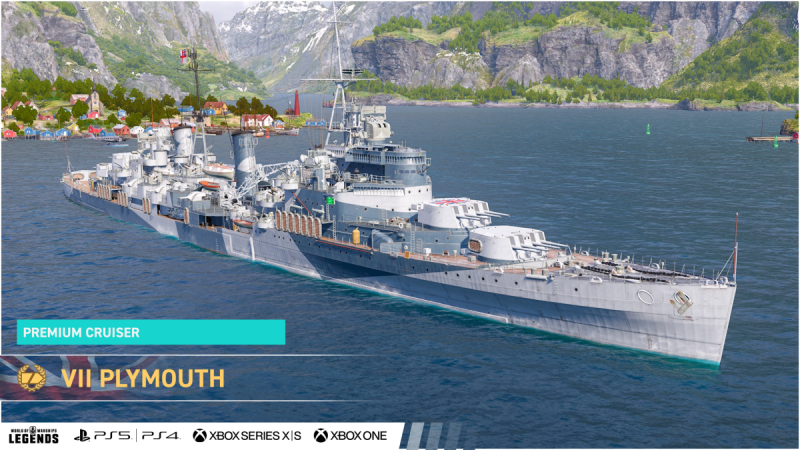 The damage-dealing machine is here to make a splash! As many as 16 AP-only slinging guns and two quadruple-tube torpedo launchers will do the talking for her. Bonus—a solid set of consumables, including Sonar, Radar, and Smoke Generator. This warship will be available in the Store from September 19. 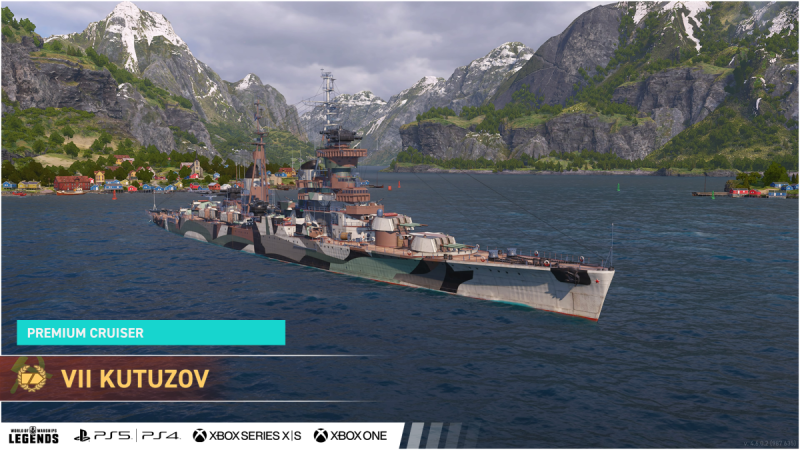 The old reliable comes back for Global XP! Kutuzov will be available in the Store for 750,000 GXP starting August 29. Pick her up for distinguished Soviet ballistics and solid fire-starting capabilities, spiced up by the Smoke Generator consumable.

With the arrival of the fall update, Tier VII ships will no longer be matched with Legendary Tier ships.

We’ve also implemented the following tweaks for a handful of ships, including Des Moines and Pan-European Tech Tree destroyers.

This USN heavyweight has just been really, really good across the board, so we opted to tone her down a bit, with corrections incoming for both her artillery and Radar stats.

This version of the famed Royal Navy cruiser has been performing subpar, with an overall buff for her stats seeming like a solid decision. Plus, as well as the next game designer's patient, she will further benefit from not encountering Legendary ships anymore.

We want to see more Bagrations out there, and we believe that a small vitamin boost alongside adding the Radar consumable is exactly enough for that.

The line, offering a specific hybrid gameplay pattern with no access to Smoke Generator, proved to be somewhat underwhelming in terms of overall battle contribution and have a learning curve that was a bit too steep. Going for a buff targeting mostly gunnery and torpedo stats for Tier II–VI ships should hopefully solve this conundrum.

We’ve resolved an issue with saturation that led to low HP ships surviving despite taking numerous hits from AP shells.

This was made possible due to introduction of Minor Penetration of AP shells or bombs. When striking a hit location with no HP remaining, the target will take 10% of the shell or bomb's damage to their ship HP. Minor Penetration cannot occur from Secondary Battery hits.

Added a new penetration ribbon for Torpedo Bulge Penetration. This appears when the torpedo defense is penetrated but no other parts of the armor are affected. In this case, no damage is dealt. This ribbon also appears whenever a shell shatters anywhere inside a ship.

Secondary batteries with armor protection will now lose their hit locations after destruction, thus allowing more hits to the hull.

There’s more good news for mobile players besides the launch of Legends on mobile devices for Canada and the Philippines:

And now a Haiku!

A storm is brewing