Server maintenance will take place on August 31, after which the Update will be pushed to consoles.

Legends! It’s been a crazy Summer, but everything has its end. Fall will bring just as much, if not more content, and quench your thirst for all things related to warships with a series of exciting additions. Let's begin!

This Update will see the arrival of the Regia Marina AKA Italian Navy, in the form of the cruiser line coming to Early Access, as well as battleship Roma—hero of the “Veni, Vidi, Vici” Campaign. No less important is a new feature that will allow better management of your Camouflage and also enable you to upgrade and create new Camos! Come on into the game, see your way to victory, and conquer the waves!

Roma, our first entry into the realm of Italian battleships is the ultimate reward for finishing the new Campaign. She resides at Tier VII, and among her traits are high speed and great maneuverability, making her a great choice if you want to cover more of the map. Her 381 mm guns are mounted on quickly traversing turrets, making switching between targets that much easier. You’ll find that you get the best accuracy when engaging in combat within a range of 15 km, and if the action gets too close for comfort, the 40% torpedo protection will play a crucial role in increasing the longevity of your naval crusade.

As you progress through conquering the 100 milestones of the Campaign, you’ll receive a trove of rewards, including, but not limited to, all kinds of Boosters and currencies, including Lira—which you can spend in the Admiralty during this Update. Additionally, you'll receive several Italian Cruiser crates, as well as an Italian Commander crate, to bolster your fleet and roster.

The Weekly Missions are cumulative this time, so they don't reset or disappear each week. However, Shakedown Trials are blocked by the Endurance Trials chain. Also note that the difficulty curve of the tasks will increase from week 1 to week 4, and slightly fall on week 5. 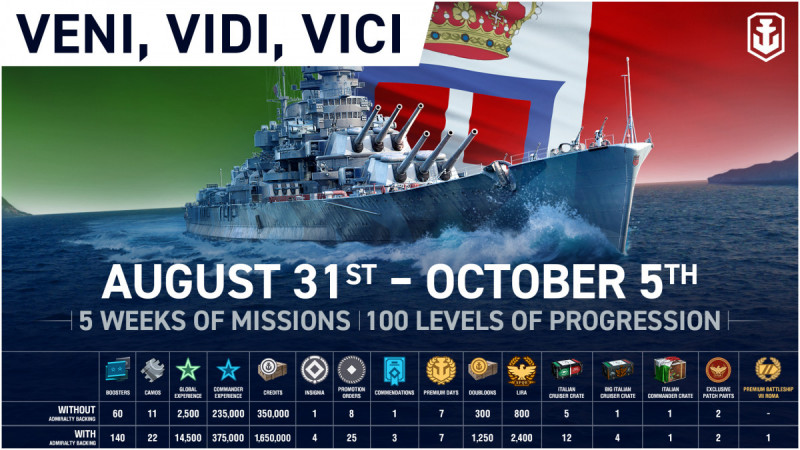 Value of the rewards without the Admiralty Backing: 18,528 doubloons

Additional rewards you can get with the Admiralty Backing (2,500 doubloons)

Total value of the rewards including the Admiralty Backing: 75,220 doubloons 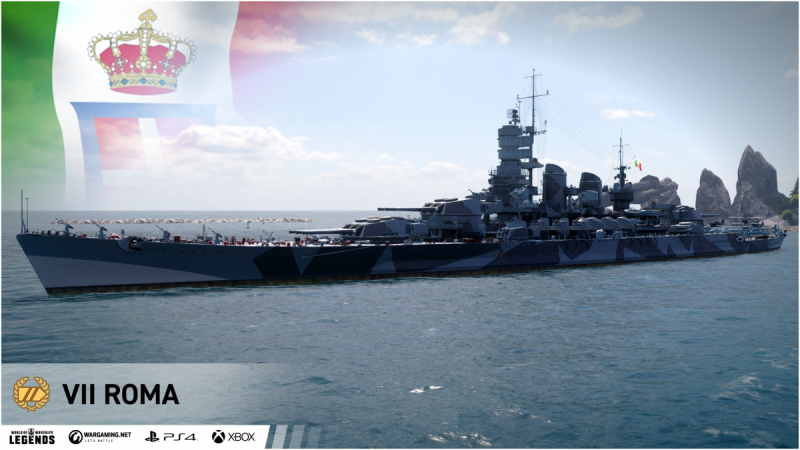 Forming the backbone of the Italian navy in Legends is the new cruiser line! This time, you'll have access to Tier I–II cruisers via research, while Tier III–VI ships will drop from Early Access crates that can be found in the Campaign and the Store. As usual, there will be two grades of containers—regular and big, with the latter having higher chances of dropping one of the new ships. Another caveat—the lower the ship's tier, the higher the chances of finding her in one of the containers.

These cruisers offer a mix of great maneuverability and light armor. Their firepower is nothing to sneeze at either, with impactful 203 mm guns at higher tiers. Their torpedo armament is also quite respectable! However, you need to be very careful while navigating these beauts, as their armor is reminiscent of their British counterparts. The full list of Italian cruisers is as follows:

The Early Access cruisers come bundled with personal missions that can each only be completed once.

A ship can only go so far without an able Commander, so making their way to the ever-growing personnel roster are four distinguished Italian officers. 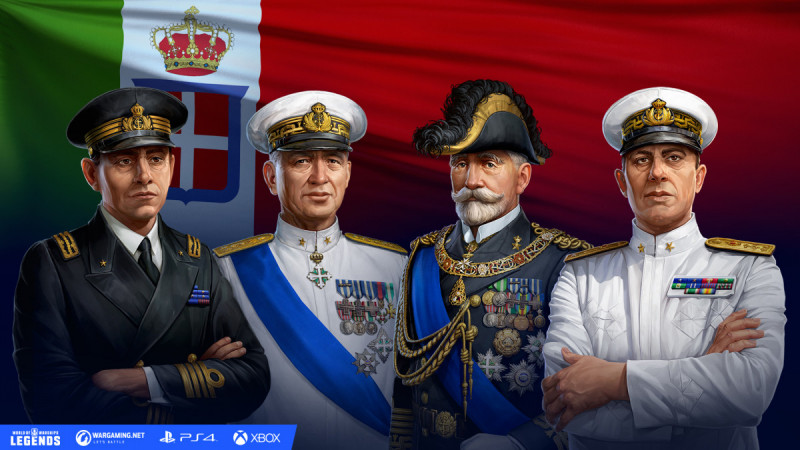 The Commanders and new skills they possess can be found below:

You've been asking us to make the Legendary skills feel more, well, "Legendary," and the point was definitely a valid one, so we've prepared a set of improvements. The main change is that these skills now have an active component that activates whenever you get close to an ally or enemy, depending on the particular skill. Note that Equilibrium of Power has been moved to the Legendary tier.

Before we move on to the descriptions of the new effects, please be informed that all players who have already reached Account Level 7 will receive 2 Commendations, while those who have Nikolay Kuznetsov or Stepan Makarov will also receive a Universal Commendation for each of them. There are slight changes to some of the existing effects, but as a rule, all new active effects empower the skills.

Skills that require enemy ships to be within a certain proximity also require that enemy to be actively spotted.

UPDATE: changes to the existing passive effects of the skills:

Four iconic Transformers characters will be released initially as unique ship skins and commanders with recognizable phrases and voiceovers. Optimus Prime and Bumblebee will set the stage for the heroic Autobots, with Megatron and Rumble to be available as their eternal foes — the Decepticons. Each of the characters will be represented as a Commander with a unique (English only) voiceover, as well as a special skin for a particular ship. There are four new base traits—one for each of the robots, and two new skills—with each character receiving one. The skins also provide cool animations for the ships, both in the Port and in battle. The Commanders and skins are available from the Store directly, but you also have a chance to find them in Cybertronian containers. Flags and patches will also be available through purchasable missions.

Our heroes, their special skills, and ships are as follows:

Whether you gave these smokeless speedsters a spin in the previous Update or not, you've almost certainly met them in battle! You can now research the full line of these gunboats up to and including the handsome Le Fantasque—complete with the Main Battery Reload Booster bolstering her 139 mm guns. Engine Boost is also present, which can push the destroyer up to the lower 50s on occasion. Perhaps, THE gunboat of Tier VII, competing for the title with Fletcher.

The time has come to enjoy more Camouflages and choose which colors you want to turn Permanent! That's right, you can now convert any Disposable Camouflage into a Permanent one by using a new currency—Paint.

Your Camo collection is about to get a lot more interesting! So, let’s find out what you can do with it:

Making Permanent Camos out of Disposable ones takes different numbers of sets depending on the Camo. However, upgrading it always costs the same amount of Paint:

Whenever buying a Camo that you already have, but that’s of a different grade, you will be compensated with Paint (unless stated otherwise). The amount of Paint you receive is always based on the lower-grade Camouflage, whether you're upgrading or getting a lower-grade duplicate from a bundle, for example. The amount of paint you’ll receive for duplicate camo is as follows: 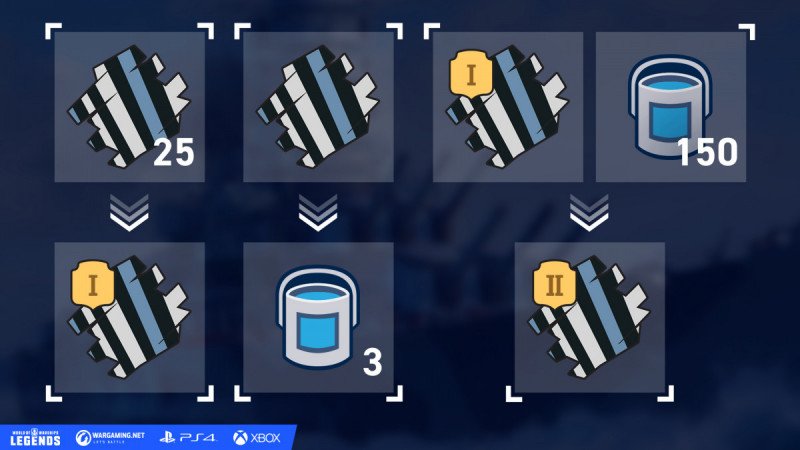 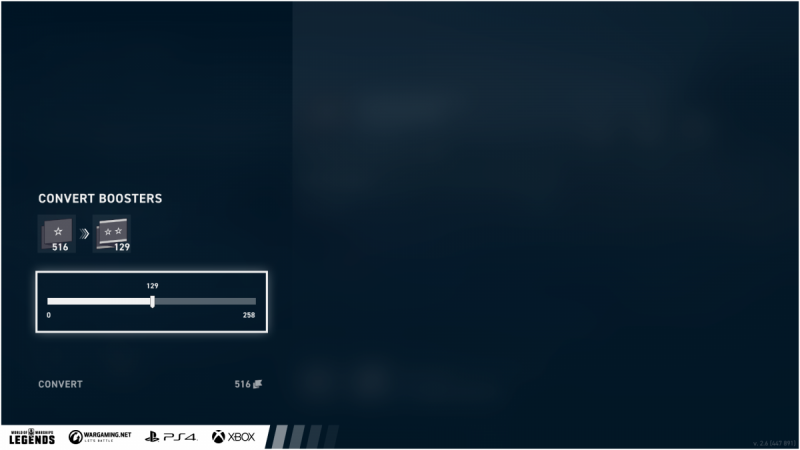 There's a 95% chance that these ships will make it into this Update, but some may end up being postponed. We’ll announce each ship a few days before she becomes available.