Server maintenance is scheduled to take place on February 1, after which the Update will be pushed to the consoles.

It's February, and while we should probably be done with all the celebrations by now, we aren't! Aircraft carriers are coming to Legends as a part of special test event, a branch of British heavy cruisers is arriving in Early Access, a new game mode—Arena—is shaking up the battlefield, and our latest Campaign features the fabled dragon slayer realized in steel—Tier VII German battlecruiser Siegfried. Add to that Lunar New Year content and some balance tweaks, and this Update is bound to make for an exciting start to 2021!

Please note: while this Update runs for 5 weeks, the next one will be released on Tuesday, March 9, instead of the usual Monday.

At long last, aircraft carriers are storming into Legends, albeit in a form of a test event. We're starting with Tier III and V ships separated into their own mode for the first 2 weeks of the Update (Feb 1–15). You'll be able to try out Japanese carriers III Hōshō and V Ryūjō, as well as their American counterparts, III Langley and V Ranger. To command the new ships you'll get the help of Ernest King for the U.S. flattops and Tamon Yamaguchi for the Japanese machines.

To get yourself behind the helm of one of the carriers you'll first have to win a couple of battles in this mode playing a non-carrier. We understand that most of you will be interested in playing carriers rather than against them, therefore the Airstrike mode has bots added to fill the battles, considering that only one carrier per side is allowed. Another important point is that we’ll allow our volunteers and a few randomly selected players to get carriers right away (ostensibly, just two battles before everyone else) to collect more data. We understand that they will have a bit more experience with the ship type at the moment of release, but that curve will flatten within the first week.

We hope that you’ll get enough of a first look to give us ample feedback! We plan to bring carriers into the game as a mainstay several Updates after this event.

Some important info about carriers in their current form:

Control-wise, hitting enemy ships with your torpedoes and bombs is going to be the most difficult aspect of the gameplay, so don't be hard on yourself if you miss the first few drops. Just as shells require a lead, planes require one too, and you need to get an understanding of your window of opportunity whenever launching an attack.

You'll be able to use ships of up to Tier VI when playing against the carriers, and you'll want to play the regular ships as there are several sets of available missions! The first batch will be available during week one of the Update, encompassing getting your first carriers (New Dimensions), carrier mastery (Born to Fly), and prowess in battling against them (Born to Swim). Week two will offer similarly titled missions for Tier IV–VI ships. The missions are chained, and Born to Fly can be quite specific with its requirements, so make sure you familiarize yourself with them!

An entirely new line of ships is entering our waters in Early Access! There are quite a few differences that these ships possess in comparison with their lighter counterparts. First, they have access to HE shells, and while the ballistic trajectories may be comparatively arced, the per-salvo damage is quite significant, no matter what shell type you use. They are also relatively well armored and have an improved Repair Party consumable that restores significantly more citadel damage than it does for other nations. Additionally, these cruisers have access to Sonar, plus their torpedoes can be launched individually, further improving your tactical freedom. Something, of course, has to give, and that something is speed and maneuverability. You'll have to “play chess” a lot of the time and try to predict your opponents’ movements.

To gain Early Access to either of the ships, open the British cruiser crates that are available in the Campaign and in the Store. As usual, the higher the ship tier, the lower the chances of getting her, and big crates offer better chances for all ships. While there's no Tier VII Albermarle available through Early Access, Tier V Premium ship London is among the ships that may drop as a reward. Please check out the drop chances at wowslegends.com/containers before making your purchasing decisions! Among the goods that can drop from the containers is also the Union Jack expendable Camo, which you can convert into the permanent version for any of your ships, including non-British ships. 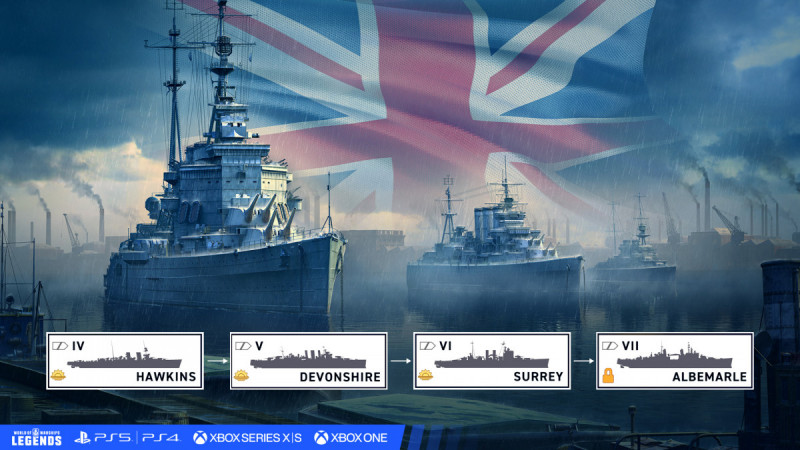 The available ships are:

Tier VII Albermarle will become available with the next Update, once the ships become researchable.

German battlecruiser (cruiser in our game) Siegfried is the centerpiece of our new Campaign. She's capable in a multitude of situations, thanks to her powerful guns with strong AP rounds, as well as her torpedoes and Sonar. The ship has found her home at Tier VII among the top competition, and she's ready to take on all comers.

Much like the previous Campaign, we're introducing a currency that you'll be able to earn once you're done with the main Campaign—from this Update onwards, it’s Steel Badges, or simply Steel. You'll be able to earn it after reaching the final milestone of the Campaign, no matter whether you have the Admiralty Backing or not. However, if you purchase the Campaign prior to the last week, you'll be able to get more Steel from Daily and Weekly Missions. Steel will become an increasingly useful resource as we add ships and other rewards available in exchange for it. The most exciting offer right away is probably going to be USS Missouri, but it will take seasoned Captains several updates to gather enough Steel to obtain her. This Campaign in particular will allow you to amass as much as 1,250 units of Steel, provided that you buy it outright on day one. Otherwise, if you finish it on the first day of week 5, you'll be able to up your Steel count by 250. Other than Missouri, you'll be able to obtain various goods in exchange for Steel, starting with Commander items. More Steel is always going to be available from either Arena or Ranked modes than from Campaigns.

The Campaign rewards include the usual array of goods—currencies, XP, Commander items, and so forth, but importantly, there are also several Royal Navy Cruisers crates that might just contain one of the newcomers!

All of the available rewards can be found below. 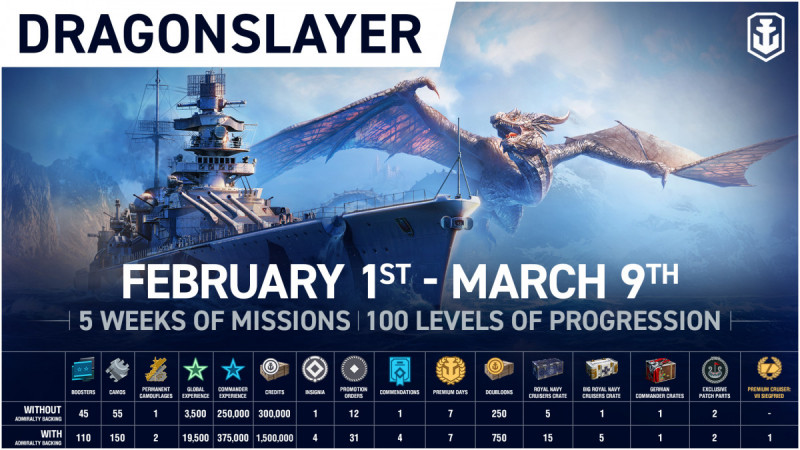 Rewards you can get without an Admiralty Backing for the Siegfried Campaign:

Value of the rewards without the Admiralty Backing: 16,190 doubloons

Additional rewards you can get with the Admiralty Backing (2,500 doubloons)

Total value of the rewards with the Admiralty Backing: 69,355 doubloons

And now for something (mostly) different. We're introducing a new game mode! Arena is a seasonal team death match event that features four teams of three ships. You'll get the chance to show off your skills playing Tier V ships and make a name for yourself across the entire Legends community by climbing the ladder! The first iteration of ladder is going to count all of your ship XP with all possible Boosters applied, so those who play the most and use boosters will come out on top. However, we will try different methods (including those unaffected by Boosters or Premium) later on. Please consider this a test season in this regards, as we plan to use other metrics in the future—not necessarily boostable by anything other than the number of games played. Importantly, the biggest reward of this season (for the top 1% of the leaderboard) is 2,500 units of Steel, which you can either stockpile over several updates to go for USS Missouri (30,000 Steel), or use to get some intermediate goods, such as Commander items.

The basic rules are:

Rewards are credited once the season is over. The exact reward you receive will depend on your standing on the ladder at the moment the season ends. There are six tiers of rewards, depending on which percentile of the ladder you end up occupying:

To commemorate the Lunar New Year celebrations, the home Port will be set to a themed haven and special content will be offered in the Store. You'll get a choice of two ships and a special container, combined in different bundles. This content will become available in the Premium Store on February 12, and we’ll announce the end date for sales separately. There are only a few balance touch ups this time, but all of them were really called for. You'll be the ultimate judge of that, of course!

There are also a couple of changes to skills and consumables, namely:

Continuing our tradition of hiding bonus codes in the Patchnotes, here's another one for 12 Hunter camouflages: S3YFESP75W.

The following ships will become available in the Store for doubloons:

Follow our news to find out when these newcomers are set for release!