Spooky season is back again and so is our Halloween event. This time it will be split in two parts. First and foremost, you’ll be tasked with saving Transylvania from Rasputin’s grip once again. Your goal is to escort her to the Portal, that will play a huge role down the line…

As soon as this part concludes, we’ll move to the next one: A Light in the Dark. To win this time, you have to defend the towers that accumulate magical energy. If you manage to hold off Rasputin and his hordes for long enough, the scientists and mages will shut the Portal down for good. In the other case... the Filth will spread all over the world and Rasputin will be triumphant.

In both events, you can gain up to five stars in a successfully completed scenario, completing secondary missions. Saving Transylvania part of the event is active from 4th October until 18th October, a Light in the Dark goes on from October 18 through November 4. 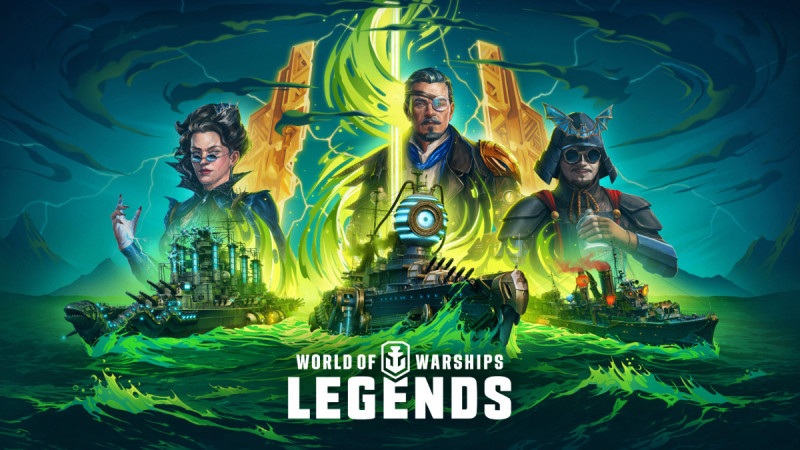 The two events feature a choice of ships and rank 16 Legendary Tier 4 Commanders that give you a few ways to go about the scenarios. Battleships take the bulk of incoming fire while restoring HP and providing cover for others, cruisers make sure that every enemy ship is on fire while destroyers provide the underwater destruction by the way of torpedo warfare. Importantly, in Saving Transylvania you'll also have to deal with catapults that throw tons of fireballs at your team, and the quickest way to dispose of them is to attack with battleship AP shells. The most crucial thing about A Light in the Dark scenario has to be the Filth—a green plague cloud that damages any player ships that find themselves inside it.

Each scenario is also highly dependent on your ability to choose the right consumables at the right time, so make yourself familiar with them, especially the defensive ones. Once you're done with a scenario, the ship you operated will go to a 30-minute time-out until you can reuse her, which can be skipped for 75 000 credits, so if you plan to experiment with the same ship, keep that in mind.

How well you did and how many rewards you get is decided by the number of stars you managed to obtain during the battle.

Requirements for each star, Saving Transylvania:

Requirements for each star, A Light in the Dark:

Now for the sweetest part: the prizes.

For saving Transylvania, depending on maximum number of stars you get in one battle (one-time reward for each number): 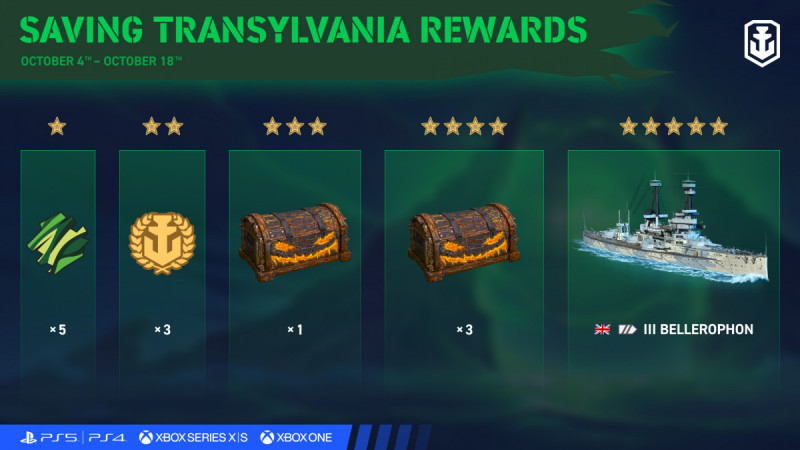 For sealing the Portal, depending on maximum number of stars you get in one battle (one-time reward for each number): 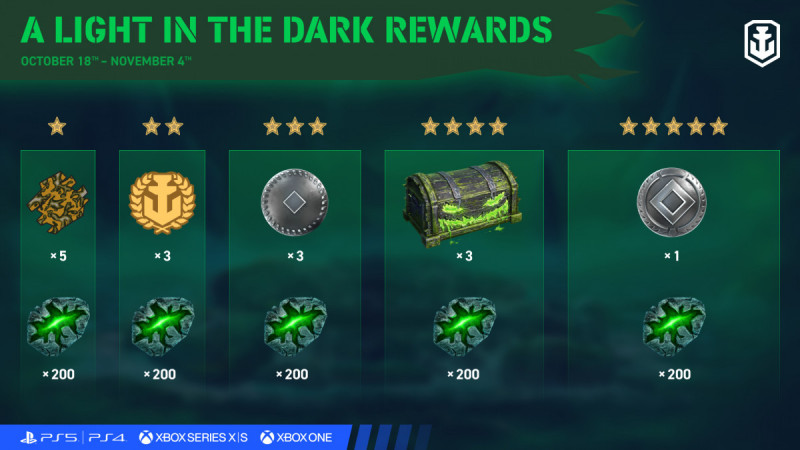 Portal Shards can be spent in the store while A Light in the Dark part of the event is active. The available range includes all kinds of goods: crates, camos, Commander progression items, with Premium Italian cruiser Genova of Tier IV as the crown jewel among those.

Within Halloween crates you can find themed Commanders and Commander progression items along with eerie skins for the following ships:

Even more good stuff can be found inside Golden Pumpkins. Obtain those in your platform store with this list of goods available:

The headliners of the second part of the event are three Commanders, going to battle against Rasputin, Gorgon and all other eerie ships coming through the Portal. Welcome Clara Teslau, Ivan D. Lightful and Nobusada Sano to our waters! The themed Commanders possess the following Base Traits and skills:

Midnight Oil (Base Trait): decrease rudder shift time by up to 3%, increase main battery traverse speed by up to 3%.

Boomsticks (unique skill): increase reload speed for torpedo launchers and your battleship main battery while increasing main battery fire dispersion, by up to 15%, 10% and 10% respectively.

Clara Teslau is a dedicated German battleship commander, improving some vital gunnery-related stats among other bonuses.

Phantom Bane (Base Trait): reduce the duration of increased detectability of your cruiser after firing the main battery by up to 12%, increase main battery reload speed by up to 3%.

Blur (Base Trait): increase both incoming fire dispersion and speed of your destroyer by up to 2%.

Sprint master (unique skill): increase travel speed of torpedoes by up to 8kt, decrease torpedo range by up to 30%.

Swift Nobusada-san is an interesting choice for Japanese destroyers, making torpedoes go significantly faster at the cost of the decreased range.

Themed Commanders are available on standalone basis and through themed crates with ton of different spooky goods and bads.

The icing on the pumpkin pie comes in form of Raise from the Dead spooky activity on social media. Visit our pages every day for 13 days straight, starting October 19, to get ancient patches and flags, including the Turn the Tide patch and the duck flag, with a secret bonus on the day of Halloween!

Be brave this season and turn the tide!