Bonjour, Captains. Another installment of the Through the Spy Glass feature sees the newest campaign ship, Tier VII Premium battleship Flandre of the French Navy, as the focal point. Let's see what she's all about. Historically speaking, Flandre is a project based on the planned Alsace class (with a reworked AA suite), which, in turn, was to succeed the famous battleships of the Richelieu class. This exact variant comes with her main guns placed in triple turrets and differently arranged AA armament. Two battleships were authorized in the spring of 1940, but they ended up not being completed due to the events of WWII.

Let's move on to the how-to section, shall we? 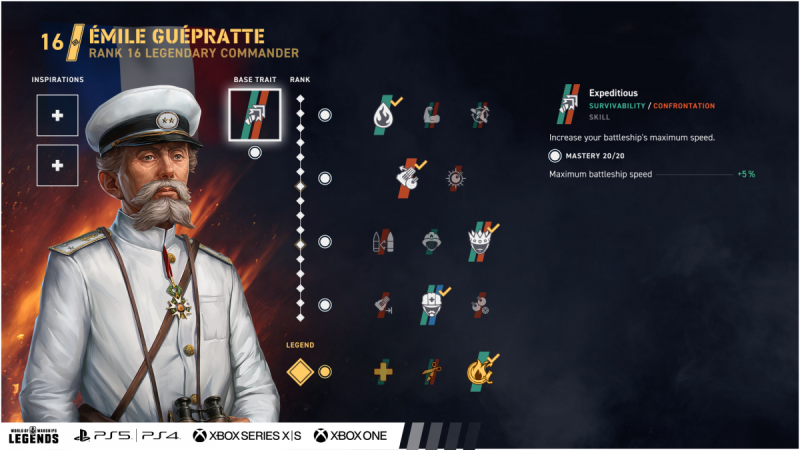 Émile Guépratte is a good all-rounder to emphasize Flandre's strengths. With his base trait—Expeditious—increasing your battleship’s speed, we recommend you select the following skills: Not the One for Nuisance for fire and flooding chance reduction; Crisscross for improved WD-40 turrets; Megalomania for that extra short reload and re-conceal-ability; Master Mechanic to increase your survivability; and Fight Fire with Fire—as battleships are at the end of the day the most vulnerable to fires—to keep you safe from the heat. Regarding inspirations, we leave it to your discretion, as there are a lot of viable options.

With that build, a medium to long range approach should yield great results if you stay on the move! On top of the usual Damage Control Party and Repair Party, Flandre also has access to Engine Boost. Other than that, what you build for is what you get in terms of performance, as you do not get Main Battery Reload Booster to give you an edge. Although, with nine high-velocity guns, punishing broadsides should not be an issue.

Fight wisely and turn the tide!