Halloween is drawing near, and so is our special new mode! Rust'n'Rumble gets down and dirty, pitting four teams of destroyers against each other in a post-apocalyptic setting. We're brawling to exhaustion, starting on October 19, and running all the way up to November 9!

Take control of one of three specially prepared destroyers, (loosely) based on Z-23 (The Rascal), Ognevoi (Lazarus), and Benham (Greasy Sam), and fight for Key Areas and frags. What’s more, you have to do all that without the oh-so-obvious destroyer perk—Smoke Generator. What's more, there’s no concealment at all, so while some of the usual destroyer tactics are out, your shooting and maneuvering skills will have an opportunity to shine. The three ships—Greasy Sam, Lazarus, and Rascal—all have different sets of consumables that lend themselves to all out attacks or prolonged survival. Three special fully ranked Commanders with new skills will do their best to assist you in winning the battle. You can deploy any of them on any of the ships, so feel free to mix and match!

The battle itself is about scoring Tabz—Key Areas and enemy ships are the priority targets. The more areas you take and ships you sink, the more Tabz your team scores. Tabz are the currency of the anti-utopian future, and you can use them to procure special items from the Admiralty. The strategy is to get as many Tabz as you can to obtain the ultimate prize—Soviet Tier VI destroyer Ognevoi! Moreover, any of the Commanders in their usual forms are also each available for 10,000 Tabz, just in case you want to deploy them on your ships for regular battles.

Once you find the destroyer you like the most, it makes sense to spend some Tabz on the improved version of her in order to take advantage of missions that bring extra Tabz. The higher the grade of your ship, the more Tabz you can effectively make per battle—both by ensuring the best battle performance and enabling you to complete additional missions. Missions to earn extra currency are available daily for Tier II (15 x 35 extra Tabz) and Tier III (15 x 70 extra Tabz) event ships.

Once you amass a significant amount of Tabz, you can spend them on Commanders, The Rascal Skin for Z-23, or the ultimate goal—destroyer Ognevoi. Even if you're just casually strolling through the mode, it’s likely that you can accrue enough Tabz to get a sufficient amount of Rust Bucket Disposable Camos to outfit your ships in the permanent version.

Please keep in mind that the event ships and their Commanders will be disabled at the end of the event. Any commanders you buy for Tabz or get from crates are yours to keep, of course.

You’ll want to upgrade these ships to earn even more Tabz! The Tier II upgrade will cost you 3,500 Tabz, while the Tier III machines will require 4,500 Tabz each. Importantly, higher-tier ships also bring additional service costs with their improved power. Tier I ships have zero costs, except for the shells you spend during combat, Tier II ships require at least 15,000 credits to go to battle, and for Tier III—a hefty 110,000. 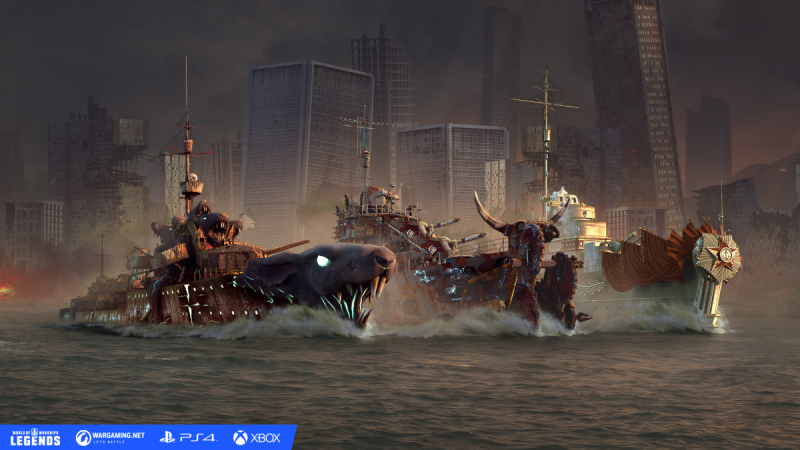 Greasy Sam is the most maneuverable of the event ships, and has access to eight torpedoes per side, as well as the Go Fast! and Scrapshield consumables. The former can temporarily boost your ship's speed by 10%, while the latter is designed to halve all incoming damage for a few seconds.

Lazarus has to be the most peculiar of the special ships—she has only two gun turrets, albeit with a good shell trajectory and decent reload speed. Her multitude of torpedoes can travel only 4 km, but she does have the Epoxy Glue and Scrap consumable in her arsenal, allowing for some serious comebacks by way of restoring her HP.

While repulsive in name, The Rascal is perhaps the best team player out of the three. She has access to Scanner Thing, which is essentially Sonar on steroids—it enables her to spot torpedoes 6 km away, allowing her teammates to veer off potentially deadly collision courses. Otherwise, she has the Go Fast! Consumable at her disposal and also possesses the farthest-reaching torpedoes of the bunch.

Three heroes are ready to take control of their destinies, as well as the fates of their ships! All of them are destroyer specialists, ready to man any of the ships, and each one offers a unique combo of base traits and skills. Please note that the regular versions of these Commanders are tied to specific nations. The Commanders, their respective nations, and their skills are below. Important note: the complete skillsets for the event Commanders and the versions of them that are available as rewards for Tabz differ a little, so please make sure to check their skills before you obtain them!

As you shall see, destroyer Ognevoi is the most expensive reward of the bunch. By our estimation, it will require you to play over 200 rounds of Rust'n'Rumble if you get the upgraded ships. The relative speed of your Tabz earning will also depend on how successful your team is in any given game, so finding a reliable partner for the grind ahead is probably a good idea.

Will you dominate the barren wastes and become the unsung hero of a world that never was? Find out by participating—earn your rewards!