Server maintenance will take place on November 9, after which the Update will be pushed to consoles.

Deep into this fall, we present you the latest Update, replete with content, stuff to do, and ships to shoot! Two new Campaigns, an alternative branch of Japanese destroyers, another Season of Ranked Battles, new Black Friday content, substantial improvements for secondary armaments, and two new Bureau ships! We're out of breath just typing this! Read on to find out what exactly awaits you over the course of the next 6 weeks. A warning: this is a long one, both this text and the Update, the latter of which will be live for 6 weeks instead of the usual 5, ending on December 21.

Not one, but two Campaigns are happening during this Update! The first 4 weeks are dedicated to Azuma, a Japanese large cruiser project designed for longer range engagements. Her main strength is her guns—the 3x3 arrangement of her 310 mm artillery offers a great opportunity to take advantage of Japanese HE shells. Her large HP pool also enables Azuma to take some punishment, but you'll need to angle her well to have a chance of bouncing lower-caliber battleship shells from the 27 mm-thick armor of her extremities. Her Repair Party also has a relatively short cooldown, which allows for emergency repairs should any heavy shells arrive unannounced. 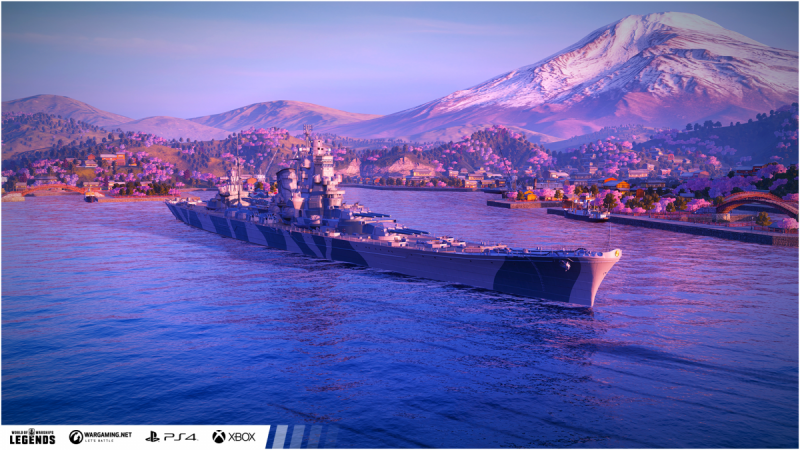 The Campaign to earn Azuma is scheduled to run across 4 weeks, starting November 9 and ending December 6. Entry is for the usual 2,500 doubloons, and there will be a range of goodies sprinkled along the 100 milestones. The mission requirements are a bit more challenging than usual, but the Weekly Havocs will also remain available until December 7. So if you like extreme chunking, you can complete all the missions within the fourth week of the Update. 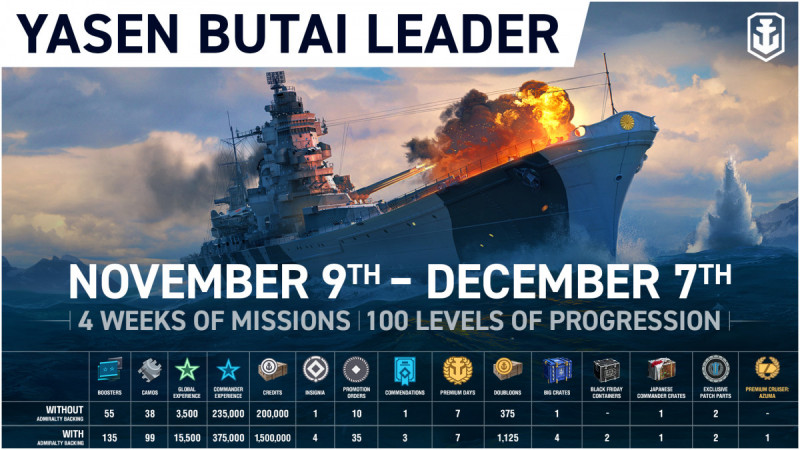 Rewards you can get without an Admiralty Backing for the Yasen Butai Leader Campaign:

Value of the rewards without the Admiralty Backing: 14,058 doubloons

Total value of the rewards with the Admiralty Backing: 64,800 doubloons

On December 6, we're switching our focus to the new Imperial Japanese destroyers (more on that matter in the next section!), and the main reward is Raizō Tanaka. While Takeo Kurita gives you artillery options, many newer players haven’t tried the Japanese destroyers at all, and Tanaka is a more universal Commander for both lines. The Admiralty Backing for the 40-milestone Campaign is 2,500 doubloons, but you get cashback of 1,250 doubloons at milestone 1.

Rewards you can get without Admiralty Backing for the Tokyo Express Campaign:

Value of the rewards without the Admiralty Backing: 7,857 doubloons

Total value of the rewards with the Admiralty Backing: 27,090 doubloons

The second alternate branch of the year is arriving! Destroyers Minekaze, Hatsuharu, Shiratsuyu and Akizuki—Tiers IV to VII, respectively—join the Japanese fleet and are available to research at your will! The split happens at Tier IV Mutsuki, which has to be researched first. These ships are a bit less focused on torpedoes, simply because of their lower torpedo count, but torpedoes are definitely still their main armament. However, the higher you move up the tiers, the more gunboat-like characteristics they display. They also have better anti-aircraft weaponry, which might become quite useful in the coming months. There are no Early Access mechanics this time, so there may be a slight bump in the destroyer population for the time being. Give the newcomers a try and be sure to share your honest opinions on any of your preferred channels. 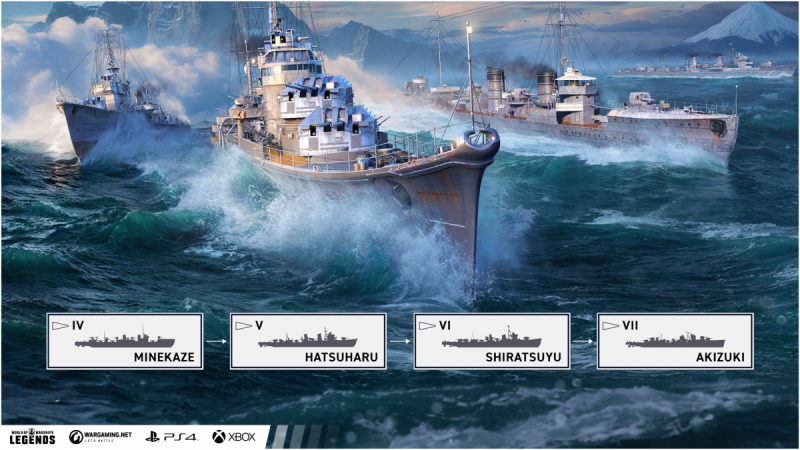 To support the new line, we're also adding a new skill that will allow you to switch playstyles somewhat on the destroyers. The Evil Sparks skill improves HE shell penetration but reduces alpha damage, so you can choose different approaches to how you handle your guns and use different shell types to your preferences.

Let's not forget about our Tier IV ships! A great deal of time has passed since we've had a ranked competition at that tier, so we figured it’s probably high time to do it, considering that many more options have been introduced since the last time. This Season is going to be an extended one, and will take place from November 16 until December 14. Seeing how this is a longer Season, we have also boosted the rewards a little. Most notably, there's a Black Friday 2020 crate at the very end, plus several Commander items, doubloons, various containers, Premium Account time, and even Paint. You'll be able to check out the exact rewards once the Season starts.

Here are the basic rules for the Season, which are pretty similar to the previous one:

Give it your best shot and attain the coveted Rank 1! Please note: no cosmetic items will be credited during the Season itself, but we may credit them in the next Update.

New Projects in the Bureau

At long last, we're introducing more Legendary-Tier ships in the Bureau. This time, it's two destroyers at once: Soviet Khabarovsk and Japanese Shimakaze. Khabarovsk is best suited to gun duels with other destroyers and even cruisers, being particularly sturdy for a destroyer and possessing possibly the best ballistics for her type. Shimakaze, the pinnacle of the Japanese destroyers, is all about torpedoes. Both projects are similar to previous Legendary projects in length and the amount of boostable Research Points. However, the ship and Commander requirements are a bit different. 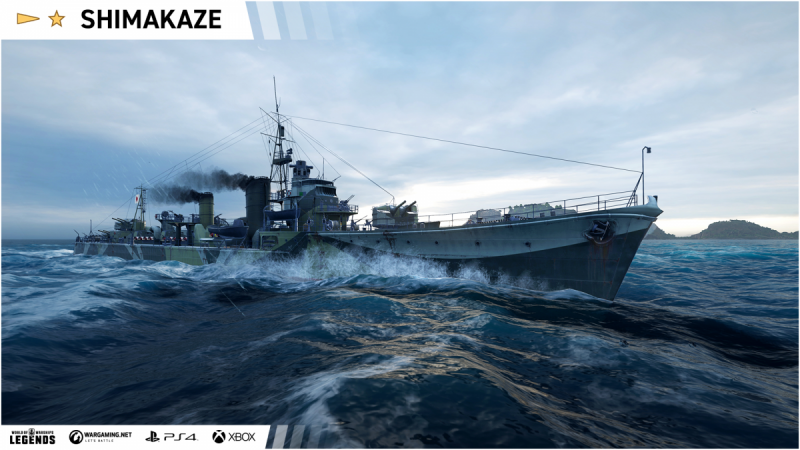 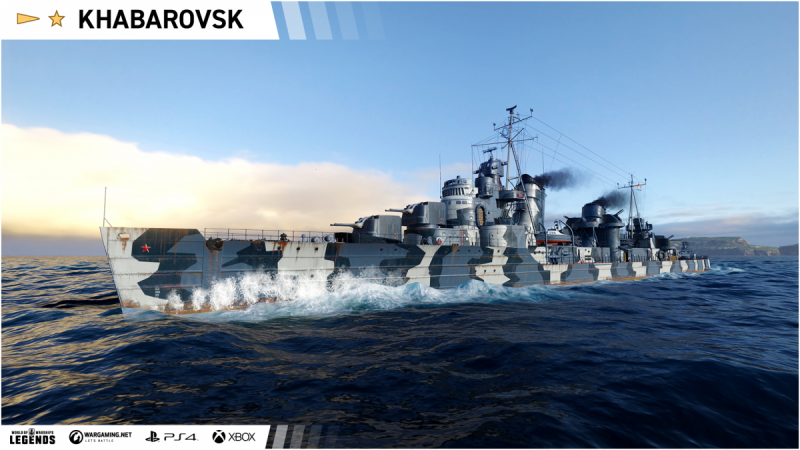 We're back for more Black Friday craziness this year with four more ships, no less! New ships and containers will be offered in the Store from November 16–30. You'll also have an opportunity to get a container by completing a special mission. The refreshed black fleet includes Mutsu, Indianapolis, Błyskawica, and Atago! Three of the ships will be available directly from the Store, while Atago is a low-chance drop from the new Black Friday containers. Other than the ships, you'll be able to get Shadow Camos, Insignias, Promotion Orders, Premium Account time, doubloons, credits, and Global XP. Should you pull Atago, she’ll come together with a personal mission to obtain a special flag. Other ships have flags available as well, but only as a part of a big package. Błyskawica comes together with her Commander, Jerzy Świrski, but only if you don't already have him.

Important note: the black ships are entirely similar to their regular counterparts, but have a dark Permanent Camouflage. They are incompatible with any Permanent Camouflages / Skins you may have for their regular versions, and are treated as separate ships. Another point is that Atago Black has significantly lower chances of being dropped than the other black ships. 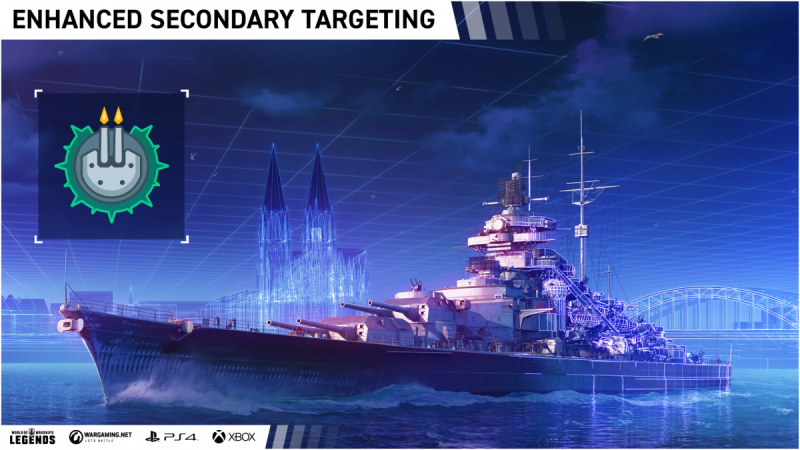 You've been asking us to improve the capabilities of secondary guns ever since we introduced the German battleships. We’re finally making that happen. There are several improvements within this Update, and they include a new consumable, a new skill, and a few improvements to existing skills. Keep in mind that, in order to inflict reasonable damage by relying on your secondaries, you’ll need to heavily invest in both your ship and Commander build, as well as get close enough to the enemy. However, the new consumable—Enhanced Secondary Targeting—will allow many battleships to make destroyers' lives significantly harder, should they wander too close. Now, let’s move on to the measures:

As we're only gathering limited-use case data from the Supertest, it’s important that you provide feedback should you decide to go the secondary route.

The secondary improvement package is expected to have the biggest impact on the current metagame, but the results remain to be seen. Meanwhile, we wanted to tune the Legendary Tier just a tad.

The Xbox Series X/S version of the game, which will be released before this update cycle is over, won’t support voice communication with other platforms (other than Series X and S) for some time. Crossplay will be supported right away, as it is currently.